It's time to step into the Wayback Machine and have a jolly trip to 1980... or, rather, sometime before 1980 but it's not quite clear in which decade our "jaunt into Horror-Adjacent City" pick for today, The Private Eyes (not to be confused with the 1976 Jackie Chan flick of the same name), occurred. 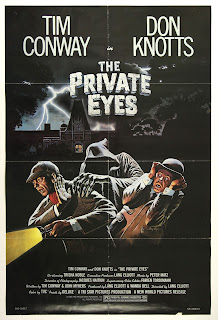 We DO know that it's in the early 20th century and we ALSO know that Inspector Winship (Don Knotts) and Doctor Tart (Tim Conway) are morons that managed to get exiled from America and are now working for Scotland Yard because that always happens to people that get expelled from their own country for being a fucking hazard to themselves and others.

Seriously.  Tart invented a gun that fires itself but only every hour on the hour.  What the fuck use is that?  Comic relief, that's what the fuck use that is now hush and let an old man reminisce.


Winship and Tart are at the Morley Manor, a quaint English mansion, to investigate the murder of Lord and Lady Morley.  Among the suspects?  Their adopted daughter, a homicidal butler around whom you cannot say the actual word "murder" (Bernard Fox, best known as Dr. Bombay in Bewitched), creepy German head of household affairs (fans of the American remake of The Grudge will recognize Grace Zabriskie as Emma, a psychic dementia patient) who rules the staff with an iron fist and the quickest knee to the groin East of the Pecos, a racist portrayal of a samurai chef, stereotypical busty maid in short frilly uniform, hunchback groundskeeper with no tongue, and racist depiction of a gypsy groundskeeper.

This is 1980, kids.  Malice-free racism was still in full swing.  We're working on it.  Be thankful we didn't get a legit African witch-doctor up in here.

ANYWHOSAWHATZIT!  This plays out pretty much like your standard Agatha Christie "And Then There Were None" mystery as the staff is dropping off like flies while our resident morons try to figure the whole thing out.  In case you all were wondering, this type of movie is the definitive forerunner to what we now call slasher flicks which is what lands it in the "horror-adjacent" category.

As for our leads, Winship is the serious one but that doesn't make him any brighter than Tart, our addlepated but lovable moron with a penchant for harboring differently-abled pigeons.  Watching these two bumble their way through this mystery farce is a master class in fucking stupid.  From they way they accidentally find themselves in hidden passageways to they way they fight over lighting a goddamn candle, you can smell the dumb coming from your blu-ray player.  It's a strong stench but not an unpleasant one.

I gotta say, kids, I love this movie but that probably has more to do with nostalgia than anything else because by any professional standards, this movie sucks on toast.  Watching it again brought up some very nice memories of my childhood watching this kind of thing with my Mom.  It's got a simple story but it's funny in that Sheckey Greene kinda way where pratfalls were king and dad-jokes reigned supreme.  It's no Clue by any stretch of the imagination and, frankly, if we're looking for any kind of intellectualism in our horror-adjacent comedies, neither of them hold a candle to Murder by Death, but it's a fun way to spend a couple of spooky, but not scary, hours with the family and a bucket of popcorn.


It does make me sad to know that this was the last movie Conway and Knotts made together (not counting a cameo in Cannonball Run II) but those two had a comedic rhythm that was unstoppable and I miss that sort of thing.  I haven't seen any kind of comedy duo, lately, that compares.

But, YES!  I still recommend this one, preferably as part of a theme night with the aforementioned Clue and Murder by Death.  Because they're all awesome in their own ways.