James Franco got paid HOW MUCH for this?

Wanna go exploring?  I sure as hell don't.  I don't like the outdoors at the best of times and the thought of doing something no one else has done in the great outdoors makes me want to vomit a little .  Wanna know why? 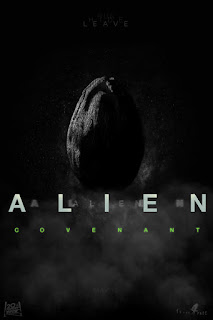 Because exploring the great outdoors is one step closer to exploring outer space and, as cool as that would be, I would be the very first to get a face full of alien dick.  Don't get me wrong.  Living in a Ridley Scott film would be awesome but I like my face and organs where they are, thanks.

All of that being said, let's look at Alien: Covenant.

So, after the events of Prometheus, which were never really explained to the folks on Earth, it seems, the Covenant is out to colonize a whole new planet and, in the process, get a radio signal from "planet number 4".  Turns out it's Doctor Shaw singing old John Denver tunes all creepy-like.

Since our crew is full of cinematic morons, of COURSE they go to investigate and thus our mystery begins.

Since this is super new, I'm not going to get too deep into the events because I DO recommend this film and I'm gonna tell you why.  I mean, you're here, right?  That's what you wanted, yes?  Is good?  Is good.

A TON of folks went into this film thinking, "AWW, YEAH!  Ridley's gonna melt our faces and we're gonna get back to the straight-up horror from Alien!"  Those people are presumptuous assholes and need to sit the fuck down for a sec and really watch this movie.  Because while we DO have the horror of the first film and the action of the rest, there's more to this film than meets the eye.

I'm sure you've noticed that each of the films in the Alien franchise has a very different feel and theme.  Regardless of whether Mr. Scott envisioned any of this for his original intellectual property, each person that has come on board has brought a very different flavor of film to the series.  Aliens went super-patriotic and blended that with a woman's need to nurture.  Alien 3 told a story about the mistreatment of prisoners.  Alien: Resurrection went totally off the rails and gave us the horrors of genetic engineering.  Prometheus started giving us a very religious feeling about the whole thing.  What are our origins?  Where do we come from?  Are we part of a vast experiment?

And, now, Covenant, where we describe our relationship with our "gods".  David, our android pal from Prometheus has moved on.  He found the Engineers' homeworld and, because he is our resident fallen angel, has displayed a decidedly antagonistic attitude about it.  David is, for all intents and purposes considering that he is NOT a human being, insane.  Insane and full of hate.

Not only does he hate humanity for not treating him as the living thing he believes himself to be, but he hates the engineers for fucking up their own process.  For not coming back and finishing the job.  Because he thinks he's better suited to it than they were.  He cannot create biological life on his own (see the Biblical character "Satan") so he must tinker with the life that is there.  Which is why we're seeing such rapid shifts in the xenomorph biology throughout the course of the film.  We go from the spores that the Covenant crew are infected with to the neomorphs, pale and sickly-looking, as our "natural" infection straight to the facehuggers and familiar xenomorph shape due to David's ministrations.

So, not only is David our representation of the origin of evil but we can also throw a full-on fear of GMOs in there, too.  I mean, a potato isn't scary but people seem to think that one that was bred to be heartier and maybe had it's DNA tweaked to resist fungus is.  A neomorph is a bit more of an immediate threat, really.

But what I noticed in reading other reviews the most is that people didn't care for the atmosphere of the film.  They didn't want it to be deep and insightful.  They didn't want it to be the mystery/thriller it was.  And it WAS a mystery.  We kind of knew that David was shady but we didn't know what he was really doing until the end.  We had to cope with a fucking "evil twin" plotline, which I'll forgive BUT JUST THIS ONCE.  We needed to watch this misotheistic Machiavelli hatch his evil scheme so that we could move forward towards seeing the things we're used to.

Frankly, I thoroughly enjoyed it.  I liked that it was much more nuanced than the main franchise and I like that it kept the flavor of Prometheus while adding the tiny twists and turns.  I like that it wasn't just straight-up face-murder.  I mean, it was a little predictable but when you're dealing with prequels, some of that is to be expected.  I fully expect the third prequel film to have David ruling an entire planet of xenomorphs and plotting to spread them throughout the universe in an effort to rid it of all biological life or incorporate the best of all species into a single, deadly, organism, because that's how the xenomorphs work, kinda like the Borg in Star Trek.

If you haven't seen it, do.  You may not like it the way I did or see the things that I did but I like to think that a little post-horror needed to find its way in here and Ridley Scott succeeded beautifully.
Posted by BobSmash at 10:17 AM