In the interest of saving my reputation as someone who watches bad movies for pleasure, I have suffered through another couple of hours of celluloid trash for you.  I do this because I love you.  It's for your own good, really. 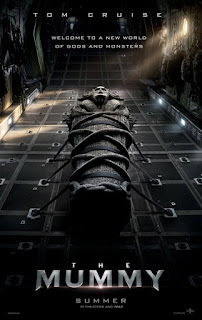 Because, really, we needed to take all of the humor and fun out of the Brendan Frasier 1999 version, move it to the present day, add a few new characters and references to other classic movie monsters so that audiences have "easter eggs", and gender-swap the whole thing so that it LOOKS like a whole new movie but, in all truth, it's really fucking not.

SO, the deal is that Tom Cruise plays Nick Morton, an utter dickhead who spends his life an an antiquities thief in the military who, for real, just should have ended up incarcerated for the shenanigans he pulls with his buddy, Chris Vail (Jake Johnson), at the very beginning of the film because he deserted his unit hunting for a town that's basically named "Curse".  That's even before they found the tomb that was a giant health and safety hazard because of a whole shit-ton of free-flowing mercury (which was used because it supposedly holds evil spirits at bay).  We get introduced to Jenny Halsey (Annabelle Wallis) as part of the aftermath of the drone strike that opens up the tomb.  She hates Nick, too.

As we all should.

Moving forward, Nick does something monumentally stupid and raises Ahmanet, our titular Mummy (Sofia Boutella)... yes, she's female, no that's not meant to be punny... unless you want it to be, I guess I can't stop you.  Rude.  ANYWAY, as part of this whole schtick, Nick gets saddled with the curse.  The curse of Ahmanet choosing him to be her vessel for Set, who, according to people that really didn't do their fucking homework, is basically the Dark Universe's (Yes, that's what Universal is calling their remakes of their classic monster films... I don't know why their team couldn't have gone cooler but the logo is nice, I guess) Egyptian Satan.  And possibly her baby-daddy because she gets ALL up in his grill a number of times throughout the film.

Yeah.  Because moldering linen, missing flesh, and the ability to summon sand and vermin are so fucking hot, right now.  She also kills Chris and keeps him around to haunt Nick into doing more stupid shit, a la Jack Goodman from An American Werewolf in London.  YAY, hallucinations and what very little humor they left in the film!

We also get introduced to Prodigium.  A secret society, led by Dr. Jekyll (Yes, that Dr. Jekyll and portrayed by the always UNFH-worthy Russell Crowe... seriously, that man can wreck every inch of it, for real.  Call me, Russell.  Call me.) that exists to hunt supernatural threats.  Because of COURSE it does.  It's absolutely amazing that these things can cause such massive amounts of property damage and loss of life that no one knows they even exist.  These folks must have some Men in Black level memory-erasing bullshit to deal with every fucking window in London being broken down into sand and flung willy-nilly, blinding and choking the entire fucking city.

So, yeah.  This movie got pretty much nothing but negative reviews from everybody most fucking deservedly because it's in that grey area between Action and Horror that nobody likes or wants.  As an action film, it was middle of the road.  As a horror film, it was not enough.  Just because you throw in a soul-sucking dead thing who can create more dead things to follow her command and her goal is to stab Tom Cruise (which... seriously?  I'm down) making him the living embodiment of fucking DEATH, does not mean you have a horror movie and, listen right the fuck up, Universal, these ARE horror movies.  Stop fucking pandering to the lowest common denominator and fucking scare us.  I know you can.  You've done it before.

For me, I didn't hate it.  It's not a great use of your time.  You COULD be volunteering somewhere or walking with children in nature but if you feel the need to spend a few bucks and get out of the Summer heat, you could do much worse.

But, I didn't fucking like it, either.  I am not a fan of making the utterly devoid of human compassion jerkface the main protagonist (and this is brought up a few times without any tangible glimpses of redemption on the part of Nick).  I don't like that they took what could be a very strong female character and made her simper at the man who saved her life for the remainder of the film.  I don't like that they took the villain and made HER simper at the man she wants to turn into a god.  She HAD the power.  She didn't HAVE to do anything but wreck shit and rule Egypt for fucking ever  (and, y'know, pay Set back for his part of the bargain).  But, no.  Let's take a being that can literally sand blast the pyramids to dust and make her vulnerable to a fucking poison dart so we can entomb her alive for 5000 years to come back to wave her decrepit genitals at Tom Cruise, The Tiniest Scientologist.

I'm not going to say that you should skip this one.  There ARE elements of this movie that I enjoyed greatly.  There are a metric ass-ton of Easter eggs that it's fun to watch for (like the Book of the Dead from the Frasier flicks popping up and all sorts of delicious nasties in glass jars).  The special effects are decent and I actually really liked Sofia Boutella's performance.  I liked that they basically gender-swapped the entire story.  I liked Russell Crowe in a well-tailored suit, and WHO DOESN'T?!?  None of these things make up for a lackluster story with too many extraneous elements and a complete lack of judgement when it comes to time and distance.

It's not good, it's not bad.  It's just meh.  Bland.  Not necessarily boring.  But bland.  Salt required.

And I SWEAR TO GREAT BLOGATHOTEP, IF YOU WRECKED MY CHANCES AT A REMAKE OF CREATURE FROM THE BLACK LAGOON, TOM CRUISE, I WILL ENSURE THAT YOU SPEND YOUR ENTIRE LIFE REGRETTING THAT YOU SIGNED ONTO THIS PICTURE!!  Seriously, bitch.  Run.
Posted by BobSmash at 10:26 AM