Did you know that cars are actually designed to look like they have faces?  The higher the horsepower, the more aggressive the face.  That being the case, Christine must have a top speed of warp fucking 19. 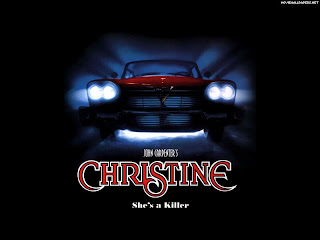 This isn't Stephen King's best movie by a long shot, but this 1983 gem is one that I, personally, adore.  As a kid, I wanted my first car to be a '58 Plymouth Fury and having it haunted by a spirit of vengeance was just a nifty options package.  And, seriously?  Think of the money I'd save on gas and repair bills.  I'm pretty sure that any model of car that has fins sharp enough to shave with just slurps the oil directly out of the asphalt, anyway.  Plus, I'd NEVER have to worry about people pissing me off.

King is the master of turning the bullied into monsters and his work with John Carpenter is always sublime.  The juxtaposition of the "Faustian bargain" with the "Yandere" (see On Widowers and Poor Dating Habits) is spot fucking on and I thought it was FANTASTIC how the car could only speak through the radio.  I never looked at Little Richard the same way, again.  Keith Gordon, who hasn't done a lot of acting since then but has been a BEAST behind the camera, played up the transition from pizza-faced nerd to greasy, arrogant cool, well, not flawlessly, but well enough that I never questioned it.

Before (on the left):  Asshole McHipster-Glasses 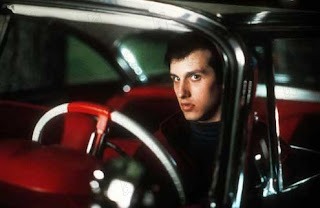 We all know the story of Christine (and if you don't, why the fuck are you here?).   Nerdy kid (who, for some reason, has the school's best football player for a best friend and, yet, is still the unpopular kid) buys a used car that turns out to be possessed.  By what, we're not sure but apparently it was possessed even before it left the factory, seeing as how it took a bite out of one of the line workers.  The movie is kinda vague on the actual inhabitant.  (The book had it possessed by the car's previous owner, a bitter, cranky old man who was pretty fuckin' evil.  Who leaves his kid to choke to death in the back seat because they might get something on the seats?  Of COURSE she's gonna get something on the seats if you let her choke.  It's called a corpse.)

Not her, but you get my point.

Now, King is no stranger to the killer inanimate object.  He brought us Trucks (Maximum Overdrive), after all, and that had anything with a motor get all stabby.  (Note to self.  Never get an electric knife.)  In Christine, though, we really do get the idea that Christine is more than just murderous, she's manipulative.  She is the very worst kind of woman and she's not even a woman.  No shade toward women, here, but Christine is a freaky stereotype gone wrong and SHE doesn't even have to resort to tears to get Arnie to do what she wants. The biggest reason I love Christine is because all of these assholes that Christine kills are fucking stupid.  Have you never heard of stairs?  Yeah, you can try going down some alley that's supposed to be too small but a demonic car will find a way to fit.  Stairs are really the only way to go.  Even better, a spiral staircase.  Sure she might knock it down but you're up there and you can always have food flown in unless you pissed off the damn helicopter, too.

One of the awesome things about Christine, besides it being the end of that era in film where girls had to put on their best Polly-Prissy-Pants voice on camera (I was seriously glad when every fucking in actress in Hollywood stopped going to the same elocution coach), was that, from a violence perspective, it would have been a PG film but Carpenter, KNOWING that everybody hates a family horror film, made sure that the word "fuck" was used enough to get it an R rating.