Y'all are gonna hate me for this.  Just remember that I love you and I never meant to hurt you.

I absolutely adore the Frank Oz 2004 remake of The Stepford Wives. 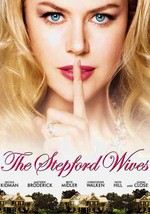 The thing is, though, that I think that people were, and are, just tired of remakes and that, coupled with the infighting on the set among pretty much ALL of the principles and Frank Oz, made for a film that did not do well.  Frankly, when taken on its own, divorced from the original, this movie is still poignant as a feminist fairy tale and, most importantly of all, it's HILARIOUS.

For those of you who aren't aware of the story, basically, it's this little town in Connecticut where the women are being replaced by extra-perfect, extra-docile, extra-wifey versions of themselves because their husbands are sexist pigs that are threatened by their wives' collective success outside of the home.  Because men are wusses.

This is played for pure horror in the original, although because it was filmed in the 70s and every woman went to the same elocution coach, it ends up being an unintentional side-splitter.  Oz decided to take it all the way to Happy Town.  The remake veers directly into Scooby-Doo Mysteries territory with Joanna, Bobbie and the new gay guy, Roger peering over each other's shoulders around corners but the basic fears are still there.

Nobody wants to be replaced.  Nobody wants to live solely for the purposes of being someone's fantasy.  When those things are real, it doesn't matter how colorful the landscape is, it's still overshadowed by dread.  Both movies were played to be "thrillers in sunlight" in order to contrast the dark secret the town holds. This is one of those "Town With a Secret" movies where you KNOW what the secret is and you KNOW that it's easily escapable but the strong woman just has to remove the villain's mask and she can't escape without her family but her family is part of the problem.  Her husband is, anyway.

The fact that most of the remake is played out like a bubblegum pop song is probably what most people hated about it but I appreciated what Oz was trying to do.  Plus, even though you can kind of see the tension between the actors, they still pull through with great performances.  Glenn Close is fucking brilliant, as always.

I really suggest that everybody give this one another chance.  It may not be the cult favorite that the original is but the remake is really not as bad as people make it out to be.  Give it another chance.