What's the first thing you think of when you hear "Amsterdam"?

And I'm pretty sure there was a LOT of it smoked when the script for Saint was written. 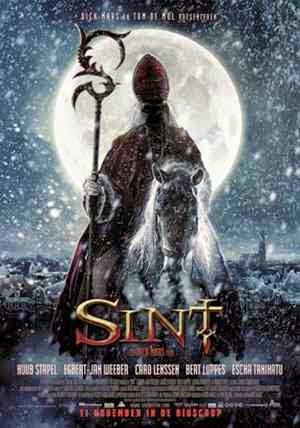 It seems that the Dutch are into horror films in a BIG way and this is just the tip of the iceberg.  Of course, we also know they're big into tulips and prostitution so I'm not quite sure what to make of this revelation.

Let's take a look at some cultural differences so this movie will make a little more sense, shall we?

First off, their holiday season is almost literally a season.  Sinterklaas or Sint Nicolaas supposedly arrives on a steamboat with his Zwarte Piets (Black Petes, their equivalent of elves AND Krampus combined and the reason "black face comedy" will never be dead) in the Netherlands on the 14th of November to make his initial sweep and take any naughty kids back to Spain.  Why Spain?  Because the remains of the actual Saint Nicholas are kept in Bari, which was part of the Spanish Kingdom of Naples.  Also because in Spain, St. Nicholas is the patron saint of sailors.  That and I'm pretty sure they're put to work in the lace and sequin mines and forced to make matador pants for eternity.

300 children died in a freak Point de Gaze cave-in to make this outfit.


The celebration continues on to December 5th which is the Feast of Sinterklaas.  This is where we get our cultural image of kids leaving out their wooden shoes in order to collect candy and possibly a fungal infection.  It's important to know, though, that Sinterklaas doesn't generally leave anything larger than candy.  Mostly that's the family part.  Beyond that, the party continues until Christmas.  So, the Dutch get THREE holidays instead of one.

So... this movie.  Apparently, all of the above is still correct but if the fifth of December falls on a full moon Sinterklaas is a stone-cold thug what with the maiming and the murdering and the oy, geflavin and he's all burnt up and zombie-like because a couple hundred years ago, the living St. Nick was all with the raping and pillaging and the citizens of Amsterdam got all uppity about it and set fire to his ship with him and all of his Black Petes on it.

Now, every 32 years, this stuff happens again a la The Fog only without Adrienne Barbeau's magnificent rack.  (In fact, there are no boobs in this one.  Sorry, teenage boys looking for surreptitious thrills.)  ONE MAN knows the shameful past and ONE MAN can save Amsterdam from a Saint gone crazy.  Of course, no one believes him.  Enter the current crop of young adults that get sucked into the mayhem.

I think this one is a heck of a lot of fun.  Sure, it's kinda predictable but it's got that Kung-Fu Theater bad dubbing thing going for it plus it's not quite your standard slasher.  The body count is moderate but there's still plenty of gore and we can always make fun of another culture's racism while blindly ignoring our own.  How jolly!

Make it a Dutch party with marzipan and chocolate and gingerbread and hash.
Posted by BobSmash at 9:58 AM