For the second time this month, I'm covering a remake as well as the original.  This, I hope, will not be a regular occurrence.  But it probably will be.  Dammit.

Silent Night, the remake, is, most definitely, not. 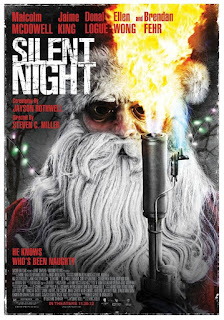 I won't lie.  I heard they were remaking/psuedo-sequeling this one and a squee was heard 'round the world.

I fear the squee was misplaced for Jayson Rothwell and Stephen C. Miller should both meet a sockful of nickels repeatedly and in rapid succession then be fed to angry Japanese hornets.  You know... those 3-inch-long fuckers. Small-town cop is afraid she can't do her job.  She kind of hates Christmas because we're not sure why but it involves her going to church before work.  Her dad used to be a cop and he caught a spree killer wearing a Santa suit and a flame-thrower and we believe that has something to do with it.  So, anyway, this small Wisconsin town has a serial killer in a Santa suit, now, and it's her job to stop him.  She is not getting any help because, as in all horror movies, authority figures are fucking useless and her boss, played by Malcolm McDowell, seems to only be interested in gnawing on the scenery.

Of course, he's never been known for "subtle".


Don't get me wrong.  I never expected it to be an Oscar™ winner.  What I DID expect, what with it starring Malcolm McDowall and Jaime King, was some decent acting.  I expected a cleaner update.  I expected not to be confused and wondering what the hell just happened.  I expected it to be darker and edgier but not so dark as to completely strip the humor out of it.  I expected to be entertained and, dammit, I wasn't.

And, you know what I expected above all?  I expected to know, without a shadow of a doubt, whether or not this was a remake or a sequel.  I mean, it had a few awesome moments, like the antlers, that are definitely a call-back but above all, this was a half-assed attempt at a brand-new story.  A lackluster "Hero's Tale" to make Jaime King's character realize that, dammit, she WAS a good cop and she's gonna GET this guy to make up for all of her past failings because SHE FUCKED UP, dammit and she admits to it and she's gonna MAKE IT RIGHT, BY GAWD!

Other than that, this movie can go silently to Hell.
Posted by BobSmash at 11:05 AM