I Miss You, EC Comics.

OK, so, this one TECHNICALLY isn't a full-feature about Christmas but 1972's Tales From the Crypt has to be mentioned. 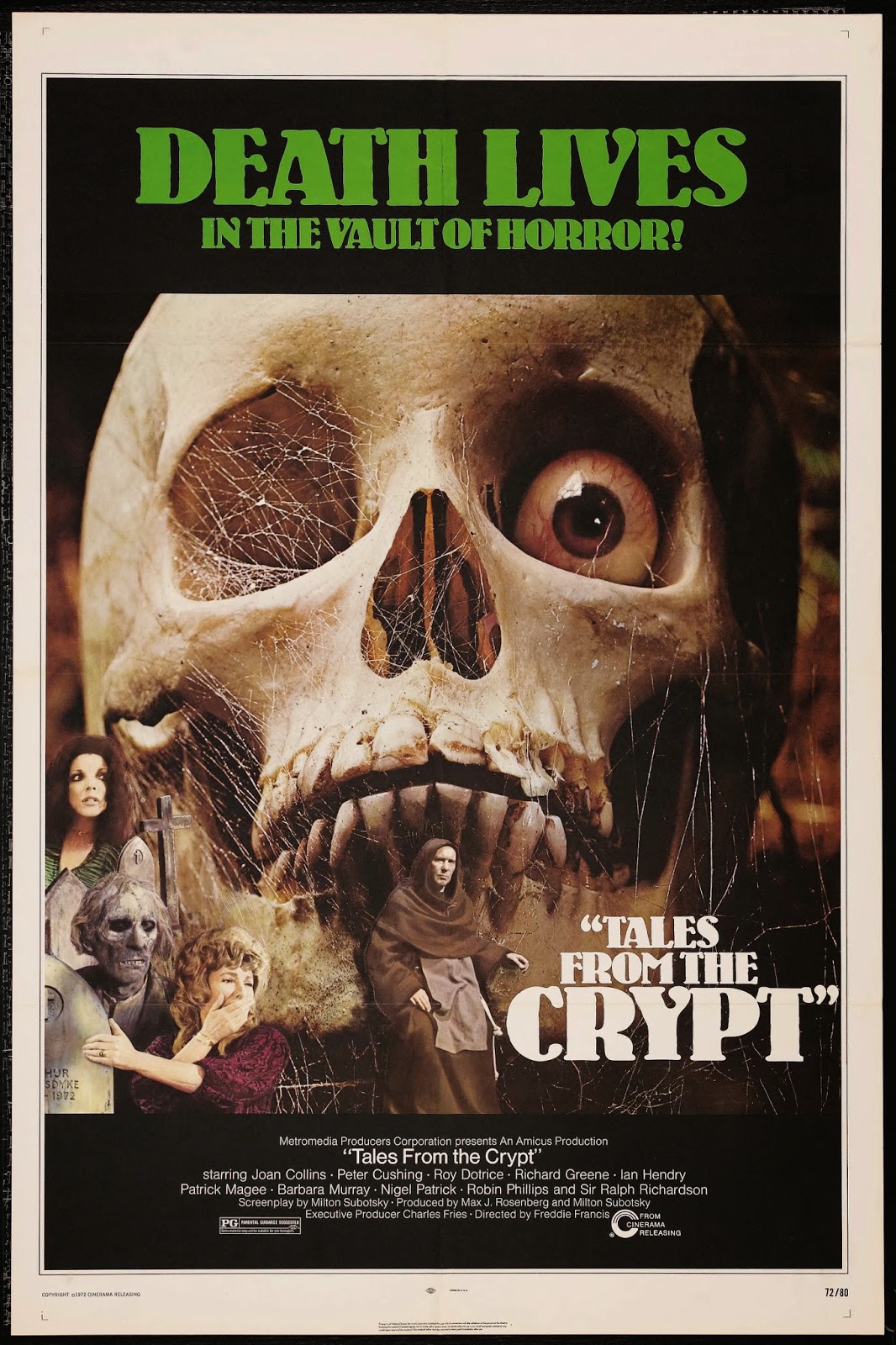 As we all know, I kinda dig creepy anthology movies and this classic Amicus Productions shocker HAS to be mentioned because, you know, it's AWESOME and because of the very first segment, "...And All Through the House".

So, the wraparound story goes like this:  A bunch of tourists being led through British catacombs get separated from the larger group (about the same time as Joan Collins notices her missing brooch which so conveniently happens to be where she's standing even though she walked a good ten feet into the frame before noticing it was missing) and come across the Crypt Keeper (who is not a dust covered hand-puppet this time and actually more closely resembles the Vault Keeper who wore a hood in the comics while the Crypt Keeper did not).  He gets to tell all of them how they'll die.

So, ANYWAY, the reason this one gets a holiday nod is because in Britain nobody put up a fuss when they put a killer in a Santa Suit into a horror film.  Because the British are awesome like that.

"...And All Through the House" finds our perennial "Into the mud, scum-queen" favorite, Joan Collins, being stalked by said mistletoe maniac but she can't really call the police.  See, she's just killed her husband for the insurance money and hasn't disposed of the body, yet.  Why she did this with her young daughter in the house is completely beyond me, but there you have it.  (Also, why she did it in a room almost completely furnished in white is beyond me, too, but I figure that she's allowed to be a little dumb pre-Dynasty.) Are Santa's eyes supposed to look like he's been mainlining gingerbread?

She does, eventually, get to make her husband's death look like an accident but completely forgets about the asshole in the Santa suit who's terrorizing her.  Her Christmas obsessed daughter, who, apparently, never got the "Get your ass in bed or Santa will never come" shout from downstairs where parents are feverishly wrapping or assembling presents and will continue to do so until the ass-crack of dawn when the kids will wake up and demolish the living room to the delight of everyone except the people who'll have to clean it up afterward, is awake and not in bed... and she let Santa in.

All of this being said, I, PERSONALLY, think that the HBO series Tales From the Crypt and Robert Zemeckis did a MUCH better job using "...And All Through the House" as the second episode.  There was just more depth to it.  This does not, in any way, diminish my enjoyment of seeing Joan Collins get badly strangled, though.
Posted by BobSmash at 11:57 AM