In the midst of the Slasher Renaissance of the early 80s, a film emerged that received a LOT of hype.  This film... was Canadian.  And that bothers me, somehow. 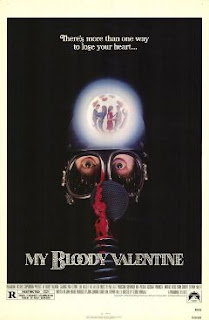 Our neighbors to the North gave us this movie.  I KNOW!  I'm shocked, too!

My Bloody Valentine.  NOTORIOUS for having 9 minutes edited out by the MPAA for excessive violence/gore.  Came from Canada.  Mind.  Blown.  That's like acknowledging the existence of Canadian Hip-Hop.  We KNOW it's there, but nobody wants to touch it.  Eeeeeeew.

So, anyway, rather than risk getting mauled by angry Quebecois and drowned in a vat of cheese curds and gravy, let's continue.

The movie starts with a couple of miners.  In an attempt to make mining gear look sexy, one of the miners turns out to be *AUDIBLE GASP* a GIRL!  (Note:  the management acknowledges that girls can be miners.)  So, apparently, in a misogynistic attempt to nip that girl-mining thing in the bud, her partner impales her on a pick-axe.  There's really no other reason for it at this point in the movie. 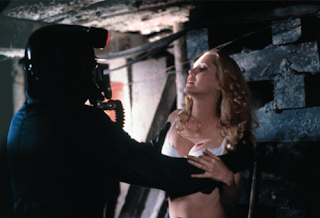 Because every woman dreams of underwires and lace under mining gear.


The town of Valentine's Bluff is then seen preparing for a Valentine's Day dance because small towns in Canada really have nothing better to do than prepare for parties.  While they do so, we get vague allusions to past tragedy and learn that this is the first one they've had in quite some time.  I'm assuming this is because the town has been suffering from the great Poutine famine of the 60s and 70s.

Enter  Harry Warden, the guy that got caught in a mining explosion 20 years ago.  He was left alive but unhinged and in protest killed a couple of  supervisors and tore out their hearts and left them in Valentine's candy boxes.  Because that's really the best way to air your grievances about a Workers' Comp claim in a country that has socialized medicine. 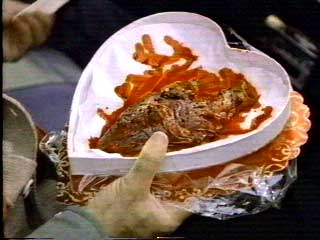 And then we get the "teenaged main characters" exposition while somebody gets another heart in a box (presumably "Inappropriately Dressed Girl's" from the opener).  Seriously, dude?  Still not the best way to get your point across.  HA!  "Point"...

Long story short, a lot of people die badly at the end of a pick-axe while avoiding saying the words "about" and "boat" and everybody assumes it's this Harry Warden guy.  It isn't.

As much as I tease, this is actually one of the classics of the slasher genre and I like it a lot.  It has a fairly in-depth plot and good acting.  Their choice of Sydney Mines, Nova Scotia was perfect for filming in (and saved them TONS of funny-colored "money" in terms of building sets since they actually filmed in the mines, themselves) and the twist at the end, while somewhat expected, is still relatively shocking.  And, now that the 9 minutes that were cut have been restored, no collection is complete without it.

Just wear gloves.  You don't know where it's been.