I've said it before and I'll say it again.  British Horror is kinda awesome.  That brings us to today's fucked-up-ed-ness, Stitches.

Anyone with coulrophobia may wish to leave. 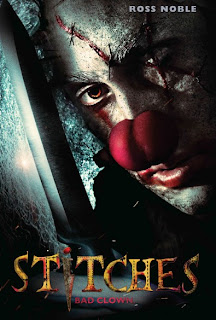 Stitches tells us the story of the brats at a party that kill a clown by accident.  Granted he was a disgusting, gin-soaked (presumably... he certainly LOOKED like he was a drunk) wreck of a man in a clown suit who probably should never have been near children in the first place, but there's no reason he should have been stabbed in the eye (and out the brain pan), even accidentally, by children.  This death, of course, leaves the children traumatized and they develop their own quirks of dealing with it.

There's the ultra-shy kid who's on Hypnocil (yes, the fake drug from Nightmare on Elm St.) and is afraid of clowns, the wicked flirt (male version, and he's not good at it), the pants-wetting practical joker, the mean girl, the nice goth girl, the stoner and the fat gay kid who is so stereotypical it makes me want to cry.  This has very little to do with the story, though, because, really?  The story is that there's a secret magical society of clowns that make sure that clowns finish their damn parties and if they have to be risen from the dead to do it, then, so be it. 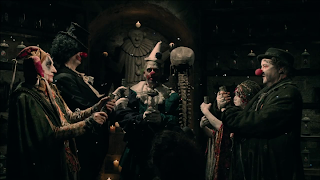 This movie is fucking silliness on a stick.  It's not a perfect blend of horror and comedy and Ross Noble, as a fucking stand-up comedian, probably should have been funnier and stopped fucking mumbling, but I realize that he didn't write the script and it was an entertaining watch for what it was.

I was expecting a lot more out of it, though.  I mean, most of the deaths are clown-related.  Parasol through the back of the head.  Intestines made into balloon animals.  It's campy as fuck but it's not really  over-the-top which is why I'm a little disappointed. 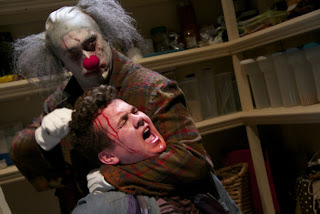 Most.  Disappointing.  Death.  Ever.


Plus?  FUCKING OBVIOUS CGI, EVERYWHERE!  Oh, MAN do I want to punch the asshole that decided to mix CGI and film without figuring out how to make it seamless first.

Yeah, he's got a cute little clown nose pet that finds the kids for him but you can do that shit with a string and it would be FUNNIER!

That said, it's got PLENTY in the way of practical effects that are... OK, and it DOES do a better job of hearkening back to the 80s slashers we all love so much but damn.  You've got an undead clown killing guests at a house party and nobody does anything about it?  No one notices a damn thing?  Seriously?  The pants-wetter gets his head kicked off his shoulders and into the pond and no one sees this?

Except the fucking clown, but he doesn't count.


My gullibility has a threshhold.  You have exceeded it.

Yes, I know it sounds like I hate this movie but I really don't.  I like it, I really do.  There's just too much wrong with it for me not to bitch.  It is kinda worth it for the party-favor dick joke, though.

One mo' time.  Your mileage may vary.