Did you know that more than a third of all sick days are on Mondays?  I did.

And that brings us to today's sick little infection, Antiviral, directed by Brandon Cronenberg, who appears to be taking up the reins from his father, David Cronenberg, in terms of body horror. 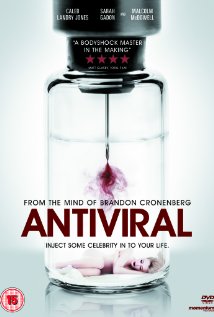 Syd March works for a pharmaceutical company that, instead of making drugs, makes, and copyrights, viruses.  Kind of.  They harvest viruses from celebrities, modify them and then inject them into adoring fans.

Yes, I said that correctly.  Fans of celebrities PAY to be injected with the diseases that these people catch.  Anything from the common cold to herpes.  Because herpetic sores are hot.

Of course, these same people pay for food products made from cultured cells of these celebs, too.  Because nothing gets you closer to a celebrity than having them over for dinner. 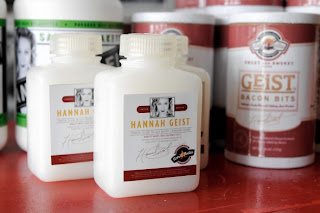 Can you throw an Angelina steak in there, too?

The protagonist (because I'm not really sure what to call Caleb Jones, AKA the freaky lookin' dude that pouts his trouty mouth through the entire movie that I hated in X-Men: First Class because he looks like Dagon and his mother had a muthafuckin' PARTY and he's the fish-faced, fetal alcohol syndrome ridden result) also sells these virii on the side in a black market operation.  He smuggles these virii out of wherever (work, harvesting trips) in his own body and cultures them at home. 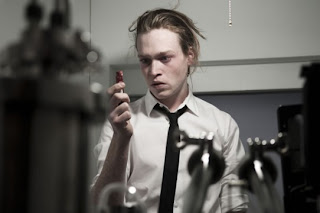 He manages to get a bug that kills the celeb he's working with.  (Or does it?)  Oops.  Now he has to figure out how to cure it.

OK, now, I have to say that Cronenberg's visuals are kind of stunning (except for close-ups on douche-nugget up there).  He's very into making a marked distinction between the clean and the dirty, the proper channels and the underground and so forth in this, BUT, in doing so, it comes across as very heavy handed.  On top of that, the "obsession with celebrity" that he gives us in his ultra-bleak, shitsack world is insulting in its anviliciousness.  It's insulting to celebrities who are shown to be disgustingly pandering to their fans, to the point of allowing this virus harvesting thing to happen in the first place.  It's insulting to the general public who are displayed as weak-willed assholes who live their lives vicariously through celebrity, devouring them both figuratively and literally, and through that, it's insulting to the audience.

On top of that, the fact that this... I can't even call him an anti-hero... is UTTERLY selfish disturbs me on a whole new level.  There is nothing that happens in this film that is not directly involved in making things work out for the protagonist.  There's no one else he's doing anything for.  It's all about him and it's recursive because even when it looks like he's doing something for someone else, it just circles back to something he wants, anyway.  And, other than the fact that he DOES get sick from his endeavors, it's only temporary and he profits off of it.

This is not to say that it's badly written and most of the actors, other than "I wanna punch him in his pouty fuckin' face", do a very good job.  It's a very slick, polished production.  My problem is that, as much as I'm totally OK with the "obsession with celebrity" angle, he not only crosses a line with it, he dances gaily across it wearing bells and day-glo Hammer-pants.

I know lots of folks love this movie because it's Cronenberg's kid and for a first time out of the gate, it's a good job.  I just can't recommend it.

Now, if you'll excuse me, I think I need to invest in a new shower.

Like that one in Silkwood.
Posted by BobSmash at 11:27 AM