Y'all know how much I kind of despise "found footage" flicks, right?  I'm really fuckin' tired of shaky-cam bullshit.  Stop making me have to take Dramamine before going to the movies, film makers!  Somebody's gonna get a kickin'. 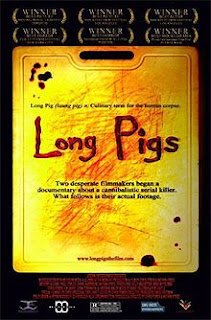 I had heard about Long Pigs a while back but I didn't get a chance to watch it until recently.  It was released to select theaters in 2004 but it's Canadian so US horror fans didn't get a lot of exposure to it.  It hit the film festival circuit but it didn't get a release on DVD until 2007.  Those DVDs?  Came with jerky.  Real.  Edible.  Jerky.

It's about a documentary film crew that follows a cannibal around. 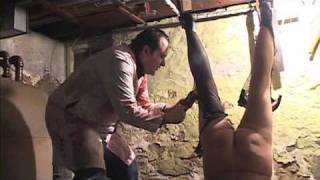 Hooker butchering.  The next extreme sport.

Yes, there were statements about the implications of media and its affect on the world but, we've seen that before.  Yes, they actually tried to philosophically and ecologically justify cannibalism which made the film kind of disturbing.  Yes, the documentarians in the movie tried to use a cannibal to get revenge (and almost got caught when their car broke down at, appropriately enough, a pig farm). 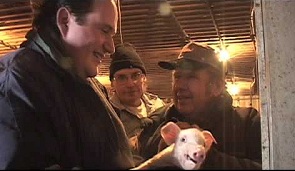 And met a creepy pig farmer because I'm not sure there's any other kind.

And, yes, they discover that the cannibal is a CREEPY MOTHERFUCKER THAT KILLS PEOPLE AND EATS THEM!  Seriously?  We had to have the interview with the father of a little girl that the asshole ATE to learn this?  WITH THE KID-EATING ASSHOLE IN THE ROOM?!?

I know there are a ton of gore-hounds that love this film for its butchery but I gotta say I was not a fan of this film.  It's not that it was badly made, it's just played out, bleak and their attempts at humor fell flat on their collective face.  If you want a horror mockumentary, watch Behind the Mask, instead.  It's a MUCH better film with a much more satisfying pay-off and better acting.

Long Pigs won a bunch of awards on the festival circuit but I really have no idea why.

This movie just made me feel dirty.

Good thing I invested in that Silkwood shower.
Posted by BobSmash at 1:12 PM