Sorry for the delay, kids.  Uncle Bob had to work.  DAMN that "real-life" thing!

Anyway, in the annuls of the "comics-to-film" genre, we don't often get horror but Steve Niles' 30 Days of Night was BEGGING to be transferred to film. 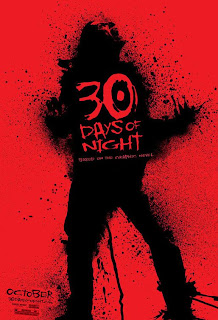 In case you are NOT aware of the comic, it comes in a handy omnibus form from IDW.  Go get yourself a copy and read it because it's kind of amazing.  I'll wait.

30 Days of Night is kind of a very localized doomsday scenario.  Barrow, Alaska, in real life, experiences 65 days per year between November and January where the sun stays below the horizon.  This is known as "Polar Night" and is depicted fictionally as the "30 days".  (Just to be clear, Barrow gets a lot of twilight and night but not a lot of "day" during that time.)

Now, it appears that there is a global vampire conspiracy and it took the bloodsucking hordes THOUSANDS OF YEARS to determine that the polar areas get less sunlight.  Because vampires are, apparently, dumber'n'a box o' rocks. 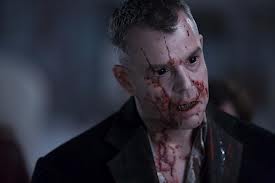 Barrow's sparse population is ravaged for a month by vampires that, thank Blogathotep, do NOT sparkle and, in fact, look like they stepped DIRECTLY out of the Uncanny Valley and don't even leave two tiny, neat holes.  If you have a throat you can basically consider it missing chunks.  They even have their own secret vampire language.  Because they're MONSTERS and that is the way it should be.  There's some kind of drama involving the sheriff and his ex-wife (because the idiots that produced it thought there should be some sexual tension instead of dealing with the loving couple that is presented in the comic).

OOH!  OOH!  Plus?!  There a little kid vampire who brings to mind both Gage from Pet Sematary AND Claudia from Interview with the Vampire!  Except she's not all pissy about the not aging thing.  That got old REAL quick. 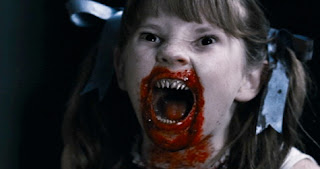 
Now, for a simple plot, the movie has more holes in it than Swiss cheese but I don't think I have to remind anyone that cheese is delicious.  Seriously, don't put any more thought into this one than is required to giggle at the people who wince at a few axe blows.  This is bleak but it's kind of an over the top bleak that skirts the edges of "camp".  I like it a lot.

I will NOT, however, visit Barrow, Alaska.

This would be because snow is of the devil.