Annie, Don't Get Your Gun

In 1990, the film adaptation of Stephen King's bestselling novel, Misery, became the first horror film to crack the top 3 Academy Awards when Kathy Bates received the Oscar™ for Best Actress for her role as Annie Wilkes.

And, seriously, bitch deserved it because she STILL scares the shit out of me. 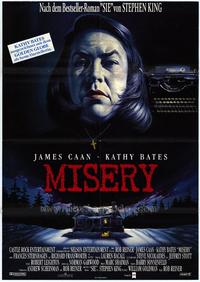 If you watch ONE Stephen King movie and you're not into the supernatural stuff, this is the one to watch.  It's not my number one favorite, but it's right up there.

Paul Sheldon is a successful writer of trashy bodice-rippers involving a Victorian tart by the name of Misery Chastain.  Seriously, she a two-timin' ho but it's all romantic and shit so the public loves her.  He, on the other hand, hates her pox-ridden guts so he goes to write a more serious novel.  He has a ritual for this that involves a particular hotel in Colorado (oddly, not that one), a single cigarette and a glass of champagne and when he's finished, he heads to L.A.

Unfortunately, on this trip, he gets caught in a blizzard and is run off the road.

Fortunately, he is rescued.

Unfortunately, it's by this lady. 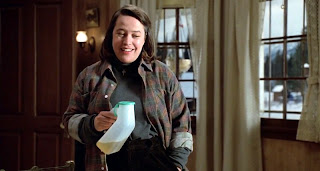 Your number one fan has seen you pee.  Eeeeeew.

Annie Wilkes is a former nurse who lives WAAAAAAAAAY out in the boonies.  She tends Paul's wounds, broken legs and dislocated shoulder in her own home.  Far away from prying eyes.  She knows who Paul is.  She's his number one fan.  The only thing she can talk about is Misery and how she can't wait to finish the last book.  She's delighted when Paul says she can read the manuscript he's got in his case.  She's not a fan of the potty mouth.

Oh, look.  NOW she's figured out that Paul killed off Misery in the last book so she tries to drive a table into his head and then reveals that no one knows where he is. 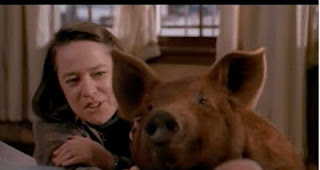 So, Annie makes him burn the new manuscript and start writing a new Misery novel, one in which Misery comes back to life.  He starts one but Annie feels cheated so she rattles on for 15 minutes about how the cliffhangers in the movies were never fair because THEY NEVER GOT OUT OF THE COCKADOODIE CAR!!  By now, we definitely know that we have to keep this woman happy.  I'm not sure flowers and candy is gonna do it.

Paul, because he spent a while learning how to increase his rogue stats (+5 Pick Locks FTW), figures out a way to get out of his room and stocks up on his pills and tries to poison Annie.  That doesn't work because she's a clumsy little psychopath.  On another trip out of his room, he finds a scrapbook that tells us that Annie is an "Angel of Mercy" serial killer. 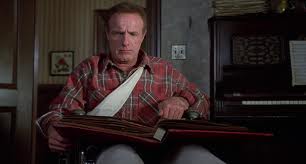 Tell me a story, Uncle Paul!

She's also a crafty bitch because THAT trip is the one that tells her Paul's been out of his room.  She decides to let him know that she knows with the help of a 2x4 and a sledgehammer. 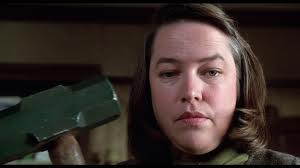 In the meantime, the local Sherriff has been looking for Paul, too, and he eventually gets to Annie's place.  Because Annie expects this, she hides Paul in the basement.  The sherriff finds him there and Annie busts a cap in him.  She tells Paul that they have to die together but Paul convinces her that he needs to finish the novel first. He does so and reminds Annie of his ritual.  She is not aware that he sneaked a can of lighter fluid up from the basement.  And, then?  End game. 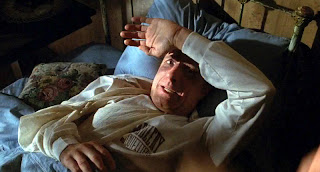 Not being able to run... that's gotta suck.

Now, normally, I would bitch Rob Reiner up one side and down the other for removing half of a novel and changing one of the pivotal scenes (in the book, Annie uses an axe, not a sledgehammer) but the battle of wits between the helpless man and the crazy woman is intense as FUCK.  Kathy Bates, as I said above, DESERVED her Oscar™.  She gave us a terrifying vision of bipolar disorder topped with a soupçon of schizophrenia, what with her visions of God and such. Her updated and slick interpretation of the "psycho-biddy" sub-genre (which I'll cover Wednesday in TropeFest) has not claws, but barbed tentacles because for a lot of the film, you like her, you really do.

Watching Paul's slow descent into meeting Annie at her level is a fun watch, too.  He has to devolve from sophistication to survivalist in order to escape Annie and her deadly mood swings.  Even though he comes out on top, he doesn't fully succeed and still ends up with a serious case of PTSD.

To me, what makes this movie so chilling is the fact that THIS CAN HAPPEN.  Hell, this HAS happened.  Pick up a newspaper.  Kidnapping and torture, while not an everyday occurrence, is not out of the realm of possibility and that's what this movie does to us.  It takes us, forcibly, into the minds of a serial killer and her reactionary victim and rattles our collective cage.  Parts of us wants to escape but we're riveted to the spot, trapped in that claustrophobic, little room, strapped to that bed, NEEDING to see what happens next.

It's not drawn out, either.  Misery is a roller-coaster and I love every second of it.

I should probably go take my meds, though.
Posted by BobSmash at 10:49 AM