Hidey-ho, kids!  Today we're gonna dip our toes into the vast, murky waters of J-Horror again because, dammit, I sat through Sadako 3D for you so you didn't have to.  Bitches. 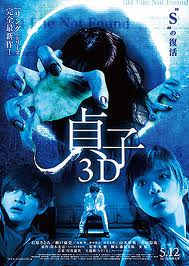 Also known as Ringu 5, director Tsutomu Hanabusa drags us kicking and screaming back into the world of Sadako, the stringy-haired ghost girl we've all come to know and loathe in the previous four Ringu films.  Because, seriously, how long can she go on being bitter about being tossed into a well?  Also, this one is in 3D which makes it even more annoying.

We start out with a dude in white tossing a long-haired girl into a well.  There's really no explanation for it but there are a whole lot of women with long, black hair and nightdresses in the well so it seems he's been at this for a while.

So, anyway, this takes place thirteen years after the events of the first movie and there's been a rash of suicides but they're all pretty darn mysterious so Detective Koiso and his partner are investigating.  The only link they can come up with is that they were all playing video on portable devices and (unbeknownst to them... because I like saying "unbeknownst") there's a voice that says "You're not the one" just before horrible hurty pain.  Koiso is all "this is just stupidness" but his partner believes in the cursed video put online by Kashiwada Seiji (the asshole in white up there), an online artist that had a troll-fight and got his panties all twisted.

In the meantime, one of the suicides is a schoolgirl in Akane Ayukawa's class.  The girl's friend, Lisa, is frantically trying to find the video because she's a stupid heifer.  When searching for the video, it leaves a 404 error but it will still play when you're alone.  Which is, like, the worst coding EVER.

The video, by the way, is Kashiwada saying "It's Showtime" like he's fuckin' Beetlejuice or something and then being strangled by an invisible force.  SMOKE AND MIRRORS, I SAY!!  But then S (she's not named until later in the movie) comes out of the screen and strangles you with her gross, unwashed locks.  She manages to get a hold of Akane and says "You are the one."

And then we find out that Akane is a telekinetic and Sadako wants her because she's powerful and with her power she can erase all humanity from existence.  That's not optimal.  Sadako snatches Takanori Andou (Akane's boyfriend?) and makes him disappear into an LCD screen on the side of a truck.  Akane tracks Sadako down to her original well and has to do battle with all of the Sadako grasshopper monsters and she wins the day by destroying an iPhone because the Japanese are fucked in the head.

Seriously, Japan?  You're not even trying anymore.  What happened to dark and suspenseful?  What happened to moody and atmospheric?  I mean, you didn't even try to go all off-the-charts crazy.  You're turning into mainstream Hollywood, Japan and I don't like it.  If you're gonna give me grasshopper girls you could at LEAST invest in decent special effects.  These were all Invasion of the Crab Monsters cheesy.  Ed Wood could have done this better and he didn't even have CGI to contend with.

I know that this movie had some out there advertising but, fuck, man.  The 3D was laughable.  The script was boring.  The lead actress stumbled her way through this like she was sharing Sharon Stone's highball on the set of Catwoman.  There was no art here.  This was all about profit and it shows.