So, in celebration of a few days of overtime, for which I profusely apologize, by the way, I finally hooked up my HD cable and sat down to big screen Netflix.  Because what's the use of having a big screen if you can't watch movies on it, right?

And then I picked my movie.  I thought I'd choose something I'd never seen and I saw this in the queue: 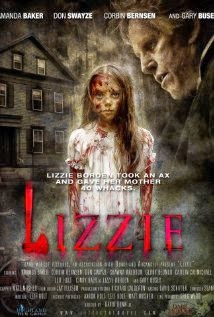 A movie about Lizzie Borden's ghost?  With Gary Busey in all of his Insano-Vision™ glory?  Count me in!  I mean, we all know I'm a glutton for punishment, right?  I watch bad movies on purpose because there are sometimes hidden gems.

This was not one of them.

Our story is about a girl who is in therapy because of something horrible in her childhood involving Dan Swayze who is an UGLY motherfucker.  Jesus.  How much work did Patrick have done to avoid looking like his brother, anyway?  Patrick's face must've cost a mint.

So, yeah.  It's all vague and involves a hatchet.

The girl inherits the house as an adult and is now living there with her boyfriend who, frankly, is the only eye-candy in the whole film and the director was OBVIOUSLY gay considering how much time he spent with the camera pointed at his boxer-brief ensconced crotch.  It's established early on that she's crazy, he KNOWS she's crazy, it's a wedge in their relationship and that his crotch needs to be set free more often than she lets it.

Seriously, that's the most interesting part of the movie.

I was so bored after watching this, I watched Hansel and Gretel: Witch Hunters again because I needed something familiar and enjoyable to drag my ass out of the pits of boredom.

You can just pass right on by this one.
Posted by BobSmash at 7:00 PM