Side Effects May Include...

I'm not normally one for medical drama.  Hell, I'm, like, three seasons behind on Grey's Anatomy because I don't work at home anymore and Lifetime doesn't show the all-day marathons like they used to.  I have no life.

ANYWAY, that being said, I got a wild hair up my ass and picked up The Facility on On-Demand. 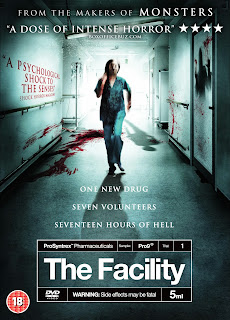 You all have heard of those clinical trials that hobos and teenagers sign up for, right?  The one where they pay you a couple of hundred bucks to lock you in a hospital ward for a few days so they can monitor new drugs and see what kind of horrible things they can do to your body?  Well that's where this movie takes us.  Right into one of these trials.  I won't say the middle of it because you start at the beginning, with the subjects being taken in and having the ins and outs explained to them.

We get our standard characters.  The asshole jock, the nice girl, the outsider kid, the nerd, the creepy old dude, the goth-ish girl, and the too shy to survive in the real world, let alone a horror movie guy.  They're brought in to test a drug called PRO9.

OK, I made that last one up.

The problem here is that's pretty much the story.  There's not much suspense other than "can they get in here" and "who's next" and "why the fuck did I do this again?"  We're not given a whole lot of information about the drug other than that it's supposedly an anti-depressant and that some of them got placebos (which, really, is standard operating procedure in scientific testing).  We don't even know that much about thecharacters as people.  There's no sympathy for them because we don't know whether or not they SHOULD survive.  Frankly, I was OK with an all-out bloodbath and I didn't even get that.

So, here's the deal, horror directors, there's a time and a place for subtle.  Having your characters turn into insane monsters?  Not the fucking time or place.  If you're gonna give me insano-drugs, give me over-the-top shenanigans.

So, there you have it.  Cold boogers on a paper plate.  I should totally ask for a refund but I don't think the cable company is gonna give me my 6 bucks back.  I should have expected it, really.  The director is the same guy that directed Monsters and I turned that shit off halfway through.

Email ThisBlogThis!Share to TwitterShare to FacebookShare to Pinterest
Labels: bland, boring, horror, not even bad enough to laugh at, review, snark, The Facility