OK, so, as part of my misadventures in Indianapolis a couple of weeks ago (not the horrible ones, the ones at Horrorhound, which were awesome), I met the folks promoting Jug Face.  Nice folks.  Real easy to talk to.  Good people.  Plus I was totally hot and they gave me a fan.

Conventions are fuckin' sweaty.  Sometimes in the good way but that's for another blog entirely.  One I do not write.  Suffer.

ANYHOO!  So, since these guys were good people, I decided to give their little flick a look-see.  'Cause I'm cool that way. 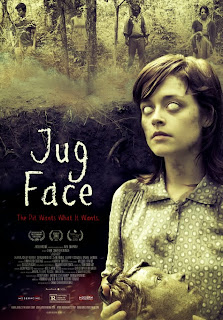 First off, let me just say that I'm very happy to see horror movies returning to R-ratings.  Sorry, but unless it's written REALLY well and it's specifically aimed at a family-friendly market, I want my horror to be loaded with bare skin and blood.  Jug Face has both.  Not necessarily in spades, but they've certainly got a noticeable presence.

The story is simple but well-told.  A young girl in a secretive hill clan that doesn't talk, like, at ALL, to city folk except to sell them moonshine, has a tryst in the woods with a handsome young man.  A stupid and angry young man, but handsome, nonetheless.  At the same time, a lone potter is making a clay pot with a young woman's face on it.  The face of the girl who's getting nailed to a tree.

The girl hikes up her drawers and heads homeward only to find that her family and neighbors are gathered around to announce that she's been engaged to the chubby neighbor kid.  Needless to say, she's not pleased.  Especially since her forest-folk family place great store in virginity before marriage and, oopsy, she done lost hers.  She keeps her mouth shut, though, and gets sent to gather everybody that wasn't there for the announcement for a barbecue.

For obvious reasons, when she goes to fetch the potter, she uses... paint?  To fake her period.  The potter declines to come to the party but on her way out, she stops to see the jug he created and is fairly shocked to see her own face on it.  So she takes it and hides it in the woods.  You'll find out why, later.


The handsome idiot is visibly upset at the party.  Naturally.  Y'know... since he expected that he'd be able to get his dick wet on a regular basis and all.  Instead, he gets all whiny about it and tells our girl to keep her damn mouth shut.  In her bedroom.  That he shares with her.  Because he's her brother.

Put your sister to the test, indeed.

So, yeah.  Stealing that jug causes a backwoods brouhaha.  Turns out that the jug faces are images of the folks that their deity, a hole in the ground, demands for sacrifice.  Considering that it's fully capable of possessing people to get its wishes known, I would be OK with feeding its face.  When its face does NOT get fed, it finds its own meal in the form of the neighbors.

Now, on top of keeping her secret, our girl's mom is entirely too concerned about the state of her daughter's vagina.  I mean, she seriously just digs her face right up in there to make sure she's still all hymen-riffic.  Go, Sean Young.  We all wondered where you went after your trip to crazy-stalker-Catwoman-town.

Oh, and did I forget to mention that our girl is pregnant?  With her brother's kid?  And proud of it?  But not proud enough to actually say it out loud?

And, just to add another wrinkle, there's a ghost kid around that warns our girl that the creature in the pit is PISSED because she hid the jug.  Seems her grampa did the same thing to protect his sweetheart and now grampa is an arthritic wreck who can't stand up from the bucket he shits in.  No, I am not kidding about that.

So, now that all of this is established, our girl, who loves the feeble-minded potter in a kind-hearted sort of way, decides she needs to take him and just fuckin' leave.  Being that she's po' white trash, she ain't got no money so she tries to sell some 'shine but the dude that she tries to sell it to calls her dad.

Now, being that these are the same folks who were behind The Woman, there's a lot to live up to, here, and, really?  It does.  In terms of story, the ideas presented are not exactly new but the way they're presented is almost flawless.  The director, Chad Crawford Kinkle, doesn't shy away from taboo subjects or a downer ending and gives us a haunting look at cult activity.  On the other hand, we're still dealing with hicks and by the end, I wasn't sure I ever wanted to hear those accents ever again.

All in all, though, this piece is thoughtful, insightful and deep.  If you want horror that makes you think, this one's for you.  It's not great but it's good enough and sometimes, that's OK.