I'm gonna be honest, here (like you expected anything different), and say that when I heard about Bad Milo, I expected a whole lot of "Children's Hospital-esque", Adult Swim shenanigans and, while I'm generally OK with that sort of thing, I don't usually appreciate it in my horror unless I'm actively looking for it.  I kind of had to watch it, though, so as to present it to you, and so it was with a shuffle in my step and trepidation in my heart that I ordered it On-Demand today. 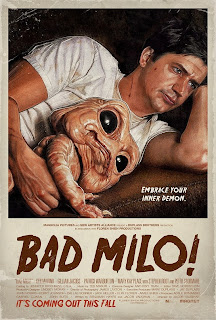 We'll start, as we always do, with the story.

Our hero, Duncan (Ken Marino), is a stressed-out accountant.  His mom (Mary Kay Place) is dating a total creeper that's half her age and she wants grandkids, his boss (Patrick Warburton) is totally skeevy, his dad (Stephen Root) is a selfish asshole (HA!) and his wife (Gillian Jacobs) really wants a family.  None of these things are things that Duncan is at all prepared to deal with.  Like, at all.  Duncan is a whiny fucking dick.


As a side-effect of his stress, he spends a LOT of time in the bathroom.  The first thing we see is him getting an ultrasound and the proctologist telling him he has a polyp.  No big thing, right?  The doc also suggests therapy to get a handle on his stress and his wife is TOTALLY on board with that, as would anyone sane.  Seriously, if your stress is affecting your ability to poop normally, you have issues.

He goes to the therapist and it turns out that the dude (Peter Stormare) is a total tree-huggin', new-age hippie.  Of course, Duncan balks at this so that just tells me that he doesn't want to take any control over his life and that makes me want to hit him.

Over the course of Duncan coming to grips with the fact that he needs therapy, people he hates start dying.  The news blames it on a rabid raccoon but we all know better, don't we?  When Duncan finally decides to go to therapy for real, we discover that he has a demon living in his ass.

And Therapist dude's advice is to make friends with it.  Because he's an ass.

So he tries to and kind of succeeds until he finds out that his dad has one, too.  Then it all goes to shit.

And the really scary thing?  I actually kinda liked it.  I mean, I DO like horror comedy and this took things a little more seriously then a lot of others.  The LACK of slapstick actually made this movie enjoyable.  The acting was OK, the script was, obviously, kind of original and that was refreshing.

Of course, I had to deal with literal toilet humor and that detracted a little but if you're into that kind of sophmoric humor, more power to you.

I say that if you want a bit of nasty with your video nasty, go for it.