I'll Be There For Yooooouuuuuuu...

We all know Danielle Harris, right?  Cute kid.  Wore a kind of iconic clown costume in a few of the Halloween sequels?  Graduated to jailbait victim in the remake and its sequel?  The bane of Victor Crowley in the Hatchet movies?  Pregnant vampire hunter in Stake Land?  We love her, right?  Tiny, little horror pixie that she is?  We like to encourage her in her endeavors.  She's awesome and deserves to succeed.

Only, now we get to deal with some growing pains in her career because she finally got the chance to direct. 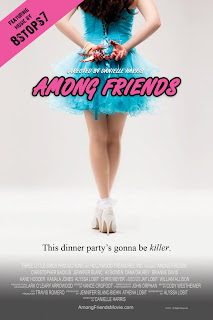 Good lord this was bland.

Among Friends, like many a horror tale before it, brings a bunch of asshole friends together for a party.  This party is special because it's all 80s Prom murder mystery themed.  This just means that coke is going to figure heavily into the evening.

I'm totally not kidding about that.

So, anyway, the kids get taken to their friend Bernadette's house in a limo.  Driven by a foul-mouthed Kane Hodder who seriously just needs to keep his fuckin' mouth shut.  I like Mr. Hodder, I really do but he's so much better when he's silent and menacing and, more often than not, carrying a damn machete covered in the blood of asshole teenagers.

So, yeah.  Decked out in their totally tubular finery, the kids make themselves comfortable until their hostess arrives and you KNOW that something is wrong when she shows up behind them like a goddamn ninja.

Bernadette (don't call her Bernie) lays out the rules and has the friends search the house for clues, placing them in strategic teams.  Why they're strategic, I really don't know.  All I know is that two of them end up high on mushrooms and one of them is doing coke in the bathroom.

Then they break for dinner and they get presents!  YAY, PRESENTS!  They're all clues to the mystery they're supposed to be solving.

Somehow or other, they all end up paralyzed and taped up to the dining room chairs.  Pretty sure it was in the booze.  They're all "I can't feel my legs!  Oh, NOES!  Who could have done this?  Who was the only damn person in the house capable of movement all this time?"

Braintrusts, the lot of them.

So, yeah.  Bernadette is a psycho.  She also happens to be a psychologist.  Nobody seems to know the difference between a psychologist and a psychiatrist so I'm gonna lay this out right now.  A psychiatrist is the one that can dispense medication.  That just begs the question "Where the fuck did she get the paralytics?"

And this is where the game gets nasty.  Her friends can ask her questions but she gets something in return.  In the case of one friend, she collects a piece of her scalp.  Another rule?  Every time someone says "please stop" someone loses a finger.

It occurs to me that many psych majors take that course load to figure out their own damn problems.

Oh, and, by the way, Bernadette has been secretly filming all of her friends whenever they're partying at her house.  Because, and I cannot stress this enough, she's CRAZY.  Only not really crazy in an entertaining kind of way.  Just in a "we need a villain, see if you can't gnaw your way through that wall" sort of way.

Those tapes are the reason behind this little shindig.

Now, I'm not saying that I don't like this movie.  I'm saying that I absolutely hated it.  I'm sorry, Miss Harris but this half-assed throwback to Happy Birthday to Me (BTW, Happy 300th Post to me!) needs a LOT of work.  I know it's your first shot and I know that you have to build your craft but I think you have to do a little homework in terms of subtlety and tension.  The bones are there but the flesh and blood is missing.

That said, the acting isn't bad.  It's not great by any stretch but it's watchable.  The cinematography isn't bad, either.  I really think that the badness just comes from script and direction.  That's a correctable thing if we can get Danielle to watch some Murnau, Craven, Hitchcock and Scott.

Do your homework, missy!  No TV until it's done.
Posted by BobSmash at 8:15 PM