In 2006, Adam Green gave us a return to the classic slasher format with Hatchet which was all well and good but today I'm gonna talk about Hatchet III because it's new and shiny. 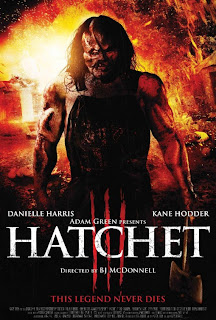 This being the third in the series, we should all be aware that Victor Crowley is a giant, deformed Louisiana ghost that has a penchant for tearing tourists into bite-sized chunks.  It should also be known that a certain Final Girl, Marybeth Dunston, is out to kill him and, indeed, it appears that she has at the beginning of the film... you know... since we watch her plunge her entire arm into his face then bisect him with his own chainsaw.

She brings the scalp of Victor Crowley to the police (led valiantly by Zach Galligan of Gremlins fame) whereupon she is promptly, and rightly, arrested because she looks like she slaughtered Texas. 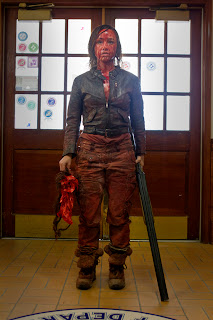 Do you not remember what I said about club soda?

Of course, the sherriff's ex-wife is a Crowley fanatic and is trying to reestablish her journalistic career with this story (since she heard it on her police scanner) and tries to interview Marybeth who, like any traumatized young adult, tells her to go fuck herself.  There's tension, there.

And then the annual Massacre of the Police Department begins on Crowley's island home.  There's a-killin' and a-maimin' and a-hootin' and a-hollerin' and the SWAT team gets sent out.  After that everything goes straight to shit.  Again. 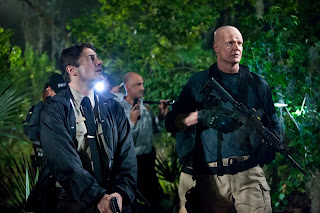 I would blame the impending blood-soaked hootenanny on all of the dick-waving but there's at least 2 women on the team and Naughton seems to be utterly cowed by the new guy.  The new guy seems unfazed at the notion of someone's testicles hanging from a tree branch.

In the meantime, the ex-wife is trying out her hoodoo-hokum method of getting rid of Crowley and she knows where his daddy's ashes are kept.  So now she has the ashes of Crowley's dad and the daughter of the bloodline of the man that killed him and all she needs to do is get Marybeth to hand Crowley the ashes and then he can be killed. 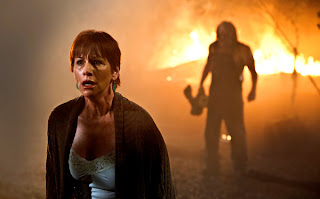 He's right behind me, isn't he?

All in all, unless you're watching these movies all together in one sitting, I'm not sure you're gonna like the Aliens-esque plot line of this one.  "Ooooh, the big bad sherriff's office/military is coming to save the day.  Let's watch them get slaughtered one by one.  Bring munchies."  We all know that the show of force is always futile.

By itself, it's OK.  It's a fun way to spend a couple of hours.  It's certainly kept a lot of humor and, for lack of a better word, charm about it.  It's just not as great a movie as the first two.  The whole series, though, is a giant "I LOVE YOU" to horror fans and I appreciate that.  Not as much as, say, Tucker and Dale or Cabin in the Woods, but it does a decent dissection of slasher flicks in its own way.  AND it does a fantastic dissection of it's characters.  Literally.  Not figuratively.  Except for one and you'll know it when you see it.  SFX failure.

Give it a watch.