You know... when a movie starts out with a dude saying "I served three tours in Iraq" you KNOW it's gonna be classy.

CLASSY, I tells ya.

And that brings us to today's good, old-fashioned monster movie, SPIDERS 3D. 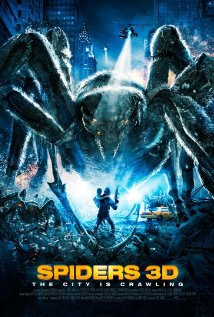 The movie starts with a hunk of the International Space Station.  Because that never bodes well.

Then we catch up with Jason, a dispatcher for the NYC Transit Authority.  They get a "distruption" and send someone in to check it out.  He's the dude that served three tours.  Just FYI.  He gets bit by something which, surprise, surprise, is a spider.  Because they show it crawling out of his pant leg.  Because SOMEONE doesn't understand the concept of "suspense".

They find out, eventually, that the "disruption" was caused by falling Russian space debris.  We knew that.  Then the worker that got bit falls on the third rail and Jason has to go play hero.  He doesn't actually GET to since the Department of Health and the police have already found the body.

Along the way, we get introduced to Russian scientist, Dr. Zarnoff and figure out that Rachel, the department of health rep, is Jason's ex.  Jason, in the meantime, goes to the morgue and the doctor there gives him the spider eggs that were laid in his buddy's guts.  Because the Transit Authority needs to have those.  Because they are all doctors and entomologists. 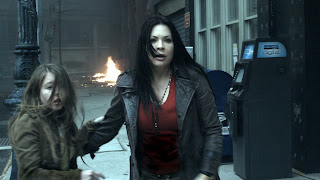 Uh, oh.  They look all concerned and shit.

So, yeah.  Jason finds a crap-ton of fleeing rats and brings an exterminator down into the tunnels.  One of their dudes gets gang-raped by spiders and they appear to be resistant to Earth-poisons.  This causes sections of New York to be evacuated.  Jason, because the Transit Authority has this kind of power, gets through a mess of quarantine barriers to get his daughter.

And then we discover that Zarnoff knows exactly what the hell is going on.  He reports that the "queen egg" needs to get to the nest, the military finds out that Jason and Rachel have the eggs, Jason tries to rescue his daughter who's been kept under house arrest and Jason and Rachel run.  All the while, the Spiders are getting bigger. 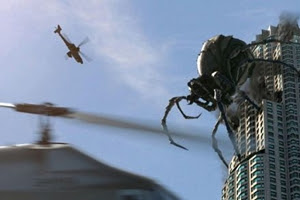 This is what you get when you cast a soap opera "star" in a movie.  ALL of the acting in this piece is overblown, extra-moody and absolutely awful.  Even the fake newscasters.  Like they're all working from cue cards.  Like they all took acting lessons from William Shatner.

I mean, holy CRAP is the acting bad!  I'm pretty sure that my eyes are still rolling.  I can't really tell.    They've been rolling for the past hour and a half.  You get used to it after a while. 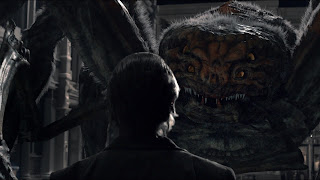 As you guys know, I'm an arachnophobe but, seriously?  I'm more scared by this guy. 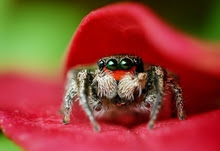 Damn, son.  Why did people spend money on this?  The Lake Placid SyFy sequels were better than this.

You may watch this but only to laugh at it.
Posted by BobSmash at 11:24 AM