Picture it.  The year 2000.  Four years after Scream made every teen slasher film self referential and ironic.  There was madness in the streets and half-assed horror films were lurking in every corner.  The faces of the entire cast were squeezed and layered on every poster.

And then came this under-rated gem. 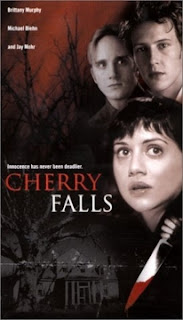 Much like in Hellbent, this one starts out with a couple in a car making out and getting massacred by a mysterious killer in black. .Meanwhile, Jody (Brittany Murphy) and her soon to be ex boyfriend are making out and Kenny thinks it's time to go all the way.  She, of course, does not WANT to go all the way and leaves the poor guy with a serious case of blue balls only to get in trouble with her dad because she's out past curfew.

The next day, when her dad, Brent (Michael Biehn), is investigating the murders, they find "virgin" carved on each of the corpses. 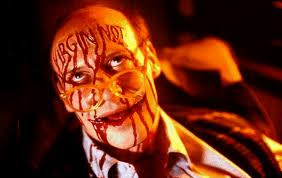 Except this guy.  Not a virgin.  Cute smile, though.

And, then, when a third victim is found, Brent holds a town hall meeting to inform parents.  This, of course, starts a fight.  Jody and her buddy, Timmy, are eavesdropping on the meeting and Timmy goes off to make a call.  Jody follows him and finds him stuffed into a locker, dead.  Then the killer is after her but her dad saves her. 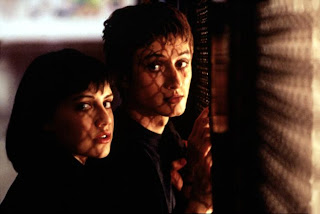 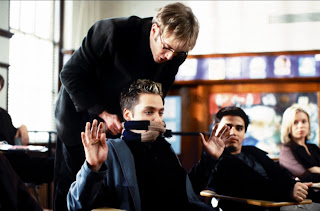 So, Jody and Kenny reconcile and, later on, Jody learns about the gang-rape claim by Lora Lee Sherman... the accusation includes her father.  Because apparently Sheriff Brent had a wild streak.  Because rape culture is alive and well, she wasn't believed and she left town and hadn't been heard from since.  Because this freaks her out, she hunts down Kenny and tries to get down and dirty but Kenny, like a responsible young man who completely forgot that he tried to push HER into sex at the beginning of the movie, refuses, saying that she should do it because she wants to, not because pissed at her parents.  This pisses Jody off and she breaks up with him again. 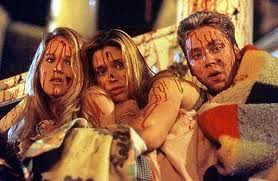 Except for one thing:  How DOES the killer know that the victims are virgins?  It's kinda improbable that they would be able to hear everything that goes on in a teenager's life?  And how would they know about a guy, anyway?

In any case, this movie, while not one of Brittany Murphy's best, was certainly entertaining.  I mean, it's cheesy but what teenage slasher flick isn't?  It was probably the last GOOD movie Michael Biehn will ever make.

I kinda wish Brittany Murphy could see this, really.  She was a star.  Her untimely death was a sad, sad thing because I really enjoyed watching her improve her craft.  She didn't do a lot in the horror genre but this unsung, b-grade giggler should be getting more attention than it's gotten in the past.