Bill Cosby Can Eat a Dick.

As an avid fan of 50s creature features and monster movies, my 15 year old self was THRILLED in 1988 to discover that Chuck Russell was remaking The Blob because fuck if it didn't need dusting off and parading around like an inexpensive sex-worker with the rent due (and, seriously, needs it again because I loves me some killer Jell-o™). 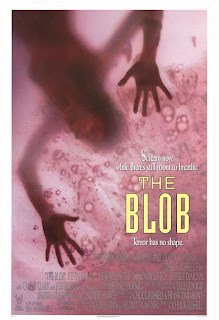 Don't get me wrong.  The Steve McQueen version was fuckin' awesomesauce but there's something about the 88 update that is near and dear to my heart.  It could be that it was one of many things that I could share with my mom (who is totally a gorehound) or it could be that violent pudding is just fuckin' cool.  I don't know and I don't particularly care.  The 1988 Blob is the shit and I'll cut anybody that says otherwise.

This is not to say that the movie doesn't have flaws but I'll get to them, later.

So, like with any movie that has to do with gruesome goo (and I think The Blob started that trope, for realsies), some asshole has to go poking meteors with sticks.  Seriously?  Really, Billy Bob the Hobo?  We step down from the trees and gain the ability to use tools and you want to revert to prodding the scorching hot rock from the sky KNOWING, after a few decades of b-grade horror cinema, that the minute you poke it you're going to die horribly?  Step away from the Sterno, dude.  It's fucking up your head.

So, yeah.  Hobo McGrimypants ends up with a handful of space goo and manages to get picked up by three high school students who give him a lift to the hospital.  How nice of them.  Good Samaritans all.  Small-town America at its finest.  Well, except for Brian (Kevin Dillon, complete with a radical 80s mullet and motorcycle-jumping action).  He's a dick.  Meg (Shawnee Smith), though, is America's fucking sweetheart.  All cheerleader-y and dating the nice boy and coming home on time and watching out for her baby brother and she makes my pancreas want to shrivel up and die she's so damn sweet.  Her steady, Paul, is Mr. Football Hero and you expect him to totally save the day but this is The Blob and it totally lives up to its "bad boy makes good" roots.  Wait for it.

Anyway, the doc gets a little busy and Paul checks in on the homeless dude and finds this:

And, then, after being suitably spooked, poor Paul gets a face full of space goo.  Thanks to the joys of 1980s Hollywood special effects, Meg gets to watch Paul get partially digested and, because she's our heroine, she tries to pull him out of the gelatinous mass but she misjudges the power of the Blob and Paul's arm comes out of the mess all by its lonesome and Meg knocks herself unconscious as the goo slips off into the night finally worming its way into the back seat of the local Lothario's date.  No, really.  Bitch gets hollowed out like a fuckin' piñata.

Now, because cops are fucking useless and they, apparently, hate all teenagers, ever, Meg meets up with Brian to discuss the Blob which they totally both saw and nobody believes them because they're idiot teenagers and they know nothing about how the world works, silly children.  And, of course, it's during that time that the kitchen help gets sucked into the drain.

Meg and Brian escape into the walk-in freezer where they discover that the space goo is vulnerable to the cold.  After the Blob moves on, they meet up with a federal team of scientists that have come out to investigate.  Oh, and they've quarantined the town.  Brian, of course, runs off but Meg is taken to her parents

In the meantime, Meg's little brother gets a wild hair up his ass and sneaks out with his buddy to see the new horror show down at the local theater.  I like this kid.  Of course, the theater is has a big old target on it and gets attacked mid-showing.  The kid's friend gets dissolved.  Suffice it to say that people end up in the sewers and that's just never pleasant.

So, it turns out that The Blob (in this version) is a mutated virus that was meant to be used as biological warfare.  BAD GOVERNMENT!  BAD!  No cookie for you.  You're in time out, mister.  Now you go to your room and think about what you've done.

And that's where we stop, kids.  You know how this goes.  The first taste's free.  You want to know how this ends you have to watch it yourself.  Far be it from me to ruin the cheesy adorableness that is The Blob.  Go on.  You have time.  If you don't have time, MAKE time.  This is one of those movie's that's awesomely bad.  But it's not even bad.  It's... awesomely mediocre.  I mean, you KNOW this isn't going to be winning any Oscars but for the time it was AMAZING!  I mean, everybody knew that blue/green screen was used because, frankly, everybody was using it.  What it gave us, though, was deft use of latex, silicone, and strawberry yogurt alongside some strong acting from some undersung actors.

On the other hand, I had to look at Kevin Dillon's ugly mug for an hour and a half and that made me sad on the inside.  Seriously, he has a bat nose and it disturbs me.

But, no, really.  If you've never seen this, this is one of those movies that makes a positive case for remakes.  No, I don't expect a remake to ever replace the original and this one did not.  I DO, however, expect that remakes will enhance the original in ways we often don't expect and THAT was definitely achieved, here.

Now, go get yourself a pudding pop and poke meteors with sticks.
Posted by BobSmash at 8:13 PM