Can we talk for a minute about Event Horizon? 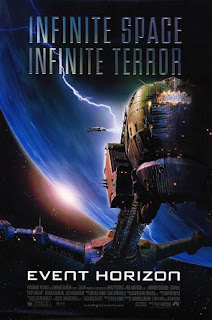 Great Zombie Cthulhu, this movie was fucked up!

Following the intrepid crew of the Lewis and Clark, Event Horizon, despite the overwhelmingly negative reviews, is just fucking horrifying and I am not ashamed to admit that I was very close to covering my eyes with my hands and shrieking like a little girl.

We start with Lewis and Clark getting dispatched to check out a distress signal from the Event Horizon.  Of course, the ship's been missing for a while so people are all "What the fuck, man?"  Since they're going to have to get the ship back, preferably in one piece, the crew, led by Lawrence Fishburne, have to drag along Event Horizon's designing engineer.

See, the engine he designed creates its own black hole to bridge the distance between to points in space which reduces interstellar travel time.

The ship is traveling in a decaying orbit, time is of the essence so they bust right in once they find it and find a bloodbath.  Adding to the strangeness, the gravity drive initializes on its own and sucks an ensign into it and spits him out all catatonic-like but awake enough to attempt suicide, after which he's put into stasis. And on top of THAT, the drive activation damages the Lewis and Clark so they all have to get on board the Event Horizon.

Now that they have to spend time on the abandoned ship, the crew starts to suffer hallucinations that are specifically keyed into their fears and regrets.  The worst of all being the engineer's wife's death.

Miller (Fishburne) has to deal with this guy:

Now, I don't know why people hated this movie.  Yeah, it takes a couple of viewings to get a handle on it but fuck if that's not a brilliant strategy in film making.  This is MEANT to be trippy and confusing and make you feel as if you're going insane.  Paul W. S. Anderson may have gotten a ton of heat for this flick but I think it's rad.