Penicillin is Your Friend

As I've mentioned before, David Cronenberg is the MASTER of body horror.  His examination of the human body and its limits in conjunction with social horrors is intense and visceral and that vision has been his since the beginning.  And with that, we're gonna talk about Shivers. 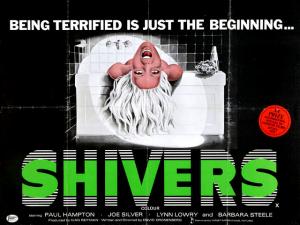 The movie starts with an ad for an upscale Canadian apartment complex.  By "upscale", I'm assuming they mean "moose-free".  A young couple, the Swedens, pop in to take a gander at the digs completely unaware that directly above them, Old Dude McCreepypants is in the process of murdering a young woman.  Also, there's a dude that gets weird stomach pains and doesn't want his wife calling him at the office.  Turns out the murdered girl is the mistress of stomach dude.

It ALSO turns out that a Dr. Emil Hobbes was the guy renting the apartment in which the girl was murdered.  We get the explanation that Hobbes was also working on getting parasites to replace human organs but he was also kind of sick of the over-rationality of humanity and the fact that we were losing touch with our own bodies so he developed a parasite that combines an aphrodisiac and a venereal disease.  Who does that?  Crazy people, that's who.  Hobbes kills himself after killing the girl.

Of course, it can't just end there, right?

Hobbes had the mistress implanted with the parasites listed above and she just spread them all over the place.  The dude with the stomach pains leaves work early and goes to the bathroom where he coughs up something nasty along with a lot of blood.  He goes out for some fresh air and freaks out some old broads by puking up a parasite in front of them.  Of course, they think it's a dead bird. Because they're blind, apparently.  The parasite hangs out in the laundry room which every 70s bachelor knows is the best place to pick up chicks.

Another old dude gets checked out by the doctor which makes him question what's going on.  Seems Teenage Dream was an equal opportunity lay.

Stomach guy's wife comes home to find him passed out in front of the fridge.  She gets him into bed where he has a conversation with the things living in his gut and then gets checked out by the local doctor after spitting out a few more bugs who are working on infecting the whole building.


So, yeah.  This is CLASSIC Cronenberg and it should be part of a Horror 101 class.  Sorry this is so short but that's really all there is to say.  Cronenberg was about as subtle as a brick, here and that's perfectly OK.

If you've never seen it, the whole movie is on YouTube.  Go.  Watch Barbara Steele in all her glory.  It's fucking required.