I Wanna Axe You a Question.

What the everliving fuck did I just watch? 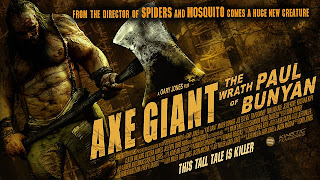 Don't get me wrong, I knew what I was getting into but fuuuuuuuuuuck.  This was horrifically hilarious.  Once again, do NOT make this into a drinking game because you WILL keel the fuck over.

Our movie starts with a damn flashback and we all know that's never a good thing.  In this case, though, we get the return of Dan Haggerty.  Dan Haggerty who needs to fire his damn agent because his career is about as inspiring as Elizabeth Berkely's.

So, yeah.  He's a late 19th century logging foreman.  He's all grinding his scary junk on this big cow that cookie is spit-roasting (only not really).  He goes to take a dump and returns to find his entire camp in chunks.  Then he gets manhandled by the Elephant Man and force-fed to a ripsaw.

Fast forward to modern day where a bunch of idiot teenagers are being shuffled off to a "first offenders" camp to scare them straight.  They have an asshole police sergeant leading the way and a meek and mild counselor to help them work through their daddy issues.

Of course, the felons in training bond on the bus to camp.

They get harassed by the local madman around the campfire and then, in standard prison film fashion, some of the inmates try to have sex and get caught and are forced to go on a hike.  Actually, all of them are forced on a hike but whattayagonna do?

On this hike, Douche-y picks up a gigantic cow horn.  Actually... an OX horn.  You get where we're going with this, right?

Yeah.  That cow from the beginning was Babe.  Loggers ate Babe the Big Blue Ox.  I'd say he looked tasty but HE was fucking CGI, too.

Anyway!  This, of course, pisses the still living and fucking immense PAUL GODDAMN BUNYON off, so he chases the team through the forest, hacking and slashing willy-nilly, actually stomping on Sergeant Tightpants because he was an ass.

They get back to the cabin and lock themselves in with a fucking hook-and-eye catch.

A hook-and-eye catch to stop a two-story tall dude with a gigantic fucking axe that he sharpens on a cave wall.

These people are stupid and deserve to die.

I don't know why I do this to myself.  Yes, this film is completely laughable and that makes it kind of worth it but I really think we need to stop handing money to cheap CGI houses.  Those bitches ruin everything.  Practical may not be cheap but FUCKING USE IT!  CGI should only be used to ENHANCE effects, not replace them.

Do your fucking job, effects folks.

Don't make me come get you.