I suppose it says something about me that I kind of avoid the Chiller channel.  I mean, yeah, sometimes they show some cool shit but for the most part they just show stuff I've already seen and kind of hated.  I think maybe if I watched it more, they might get more money in which to show better shows but for now, their line-up does nothing for me.

And then there's their "Original Movie" division which, let's face it, is just as cheesy as their parent channel, SyFy.  And with that, I bring to you... 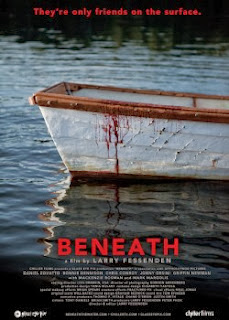 There was anticipation in this film.  There was suspense.  There was "Where the hell is this movie going?  I have to see because I need to know whether or not I wasted my time!"  And waste my fucking time, I did.

Holy shitballs, this was a fuckin' snoozefest.  I literally only kept watching to see if it would get better.

Yes, a fucking scratch.  There wasn't even enough blood to paint a postage stamp.  I've had hangnails that bled more.  I'm fairly certain that the stupid bitch bled more during her period but that's just not dramatic, is it?

And the "OMG, everybody's sleeping with everybody else except the one kid who WANTS to sleep with Blondie McHotPants" badly acted faux-drama was just... ugh.  There are no words for the tedium.  None.

Seriously, Larry Fessenden.  Fuck you.  I should not be watching a movie JUST out of "There's nothing else on and I'm too lazy to flip through the channels."

I suffer for you people.  Remember that when it comes to gift-giving.  Christmas is coming, fellow nerds.  I wear a large t-shirt and Legos are always welcome.