Apparently, this year is a big year for filming sequel remakes in Eastern Europe because this is the second one I've seen in a fuckin' week.

That being said, there's a VAST difference between the gigantic suck-fest that is Fright Night 2 and the newest iteration of I Spit on Your Grave 2.  Most notably the presence of a 20 minute rape scene that puts Irreversible to shame. 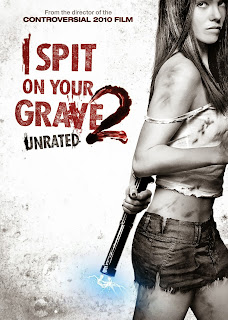 ISOYG2 follows Katie.  An aspiring model in New York who desperately wants work.  She finds an ad for a free photo shoot which, of course, is run by a skeevy Eastern European dude who, seriously, just wants her to get all oiled up and nekkid.  She refuses, natch, and gets to maintain her self-respect and dignity.

The uber-nervous Georgy feels bad for her and brings her her pictures.  She's rightly creeped out and locks him out.  Later on, she wakes up to find that he's in her damn bedroom snapping pictures on his iPhone.  She tries to get him out but he managed to be all "You like me, right?" and gets her hogtied on the floor.  Her neighbor hears her screaming and bursts in all hero-like only to get stabbed.  A lot.  And then Katie gets poked up the butt because Georgy is convinced that she really likes him.

And then Georgy calls his brothers to help him clean up the mess.  In the process, Katie gets drugged, forced to touch the knife that killed her neighbor, and stuffed into a box and then wakes up chained to a pipe in a basement being raped AGAIN.  She escapes and finds out she's in fucking Bulgaria. Because people weren't freaked out by Eastern Europe enough in A Serbian Film.

The social worker that comes to get her from the cops turns out to not be a nice lady.  Who just happens to know the rapey brothers.  Because she's their mom.

The rest of the film follows Katie and her roaring rampage of butthurt.  (HA!)

Now, from a feminist standpoint, just like in slasher flicks, Katie makes the audience (particularly the male audience) empathize and root for a female protagonist.  Even taking into account the fact that there are not one but two extended rape scenes, the evolution from victim to survivor is Kind of awe-inspiring.

On the other hand, this movie was about 20 minutes too long, had superfluous plot points, made me suffer through some truly horrendous noises that should never come from a woman and had about the worst deus ex machina I've ever seen in horror fiction.

All of that aside, as a rape-revenge film this one is pretty high up there.  It makes you uncomfortable and it makes you think about what you would do in that situation.  About the only thing that's improbable is smuggling a human being in a trunk to Bulgaria.  In this day and age, getting that shit past TSA is not an easy thing.

If you think you can handle this, give it a shot.  Don't seek it out if you have the least problem with rape because this is unflinching.