You know, I spend a lot of time defending remakes but sometimes a director just needs to be slapped.  Slapped until they reveal the person that gave them their funding then slapped again just to make sure.  And then we find the funders and slap them until they pay me lots of money to stop slapping them.

Because, seriously?  SERIOUSLY?  What the fuck were you thinking? 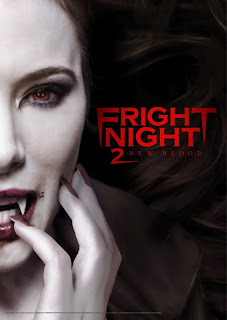 I was looking forward to Fright Night 2 because I really like Jaime Murray.  This'll teach me to look forward to stuff.  I can never have nice things.

And, we all know how the remake of Fright Night went.  Because any good horror movie fan would have seen it.  It was OK.

And now, here we are with a remake of Fright Night 2.

Or, should I say, a gender-swapped remake of Fright Night with half the premise, half the excitement, half the talent and half the budget.  And it shows.  A lot.

This is EXACTLY like Fright Night except it takes place during a school trip to Romania (thus explaining the budget) and the vampire is a woman.  A very famous woman.

I bet you'll never guess who she is.  I'm gonna tell you anyway because I hate surprises.  Bitch is Elizabeth Bathory.  Bathes in the blood of virgins.  Very fucking Polish.  Not related to Dracula at all, even though the director (I'm looking at you, Eduardo Rodriguez... AND you, writer Matt Venne) chose to link her to Stoker's novel AND base her in "Dracula's castle".  Do your fucking homework, for serious, assholes.  I don't want to hurt you but I feel I must at this point because you're just muddying everything up AND giving Bathory a history she does not possess.

As a lifelong fan of vampire stories, that just pisses me off.

But, anyway, let's talk about sequels for a minute.

Aren't sequels supposed to at least acknowledge the events of the first movie and not retell the story of the first movie with the only changes being a gender-swap here and there?  Isn't Evil Ed supposed to be a nerd, not a bro?  Seriously, Evil Ed should be a BRONIE before being anything resembling "cool".  Evil Ed is not all leather jackets and swagger.  Evil Ed is cosplay and comic books.  This ALONE makes me hate this movie.  Didn't Amy have more sass even when she was played by a perky lesbian?  Didn't Jerry Dandridge (not GERRI Dandridge, as she's named in this one) ooze more sex?

Seriously, the only thing I can recommend about this movie is the guy playing Peter Vincent and even he's a fucking douche.  The only bit of hilarity?  Vincent has a tattoo of a cross on his chest and he tries to kill Evil Ed with a fucking hug.  A HUG!  He's like goddamn Mati in Captain Planet.  The power of heart does not fucking help.  Why do people always forget that?

Steer clear, kids.  Even the boobs in this one are sad.
Posted by BobSmash at 7:46 PM

Email ThisBlogThis!Share to TwitterShare to FacebookShare to Pinterest
Labels: Fright Night 2 New Blood, horror, not even worth your time., review, seriously bad, snark