So, you all know how much I heart the Child's Play series, right?  (Barring Child's Play 3 which, frankly, can be removed from my memory any time, now, because it sucked and sucked hard.)  It is with that love of Voodoo-enchanted plastic in mind that I bring to you today's review... 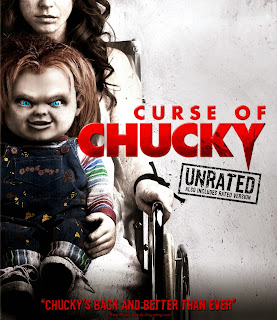 At least, that's what I'd say if I managed to actually LIKE this one.

Our story is about Nica, a young paraplegic woman who lives with her mother (played by Fiona Dourif, Brad Dourif's daughter).  Mom gets a package in the mail that happens to be a Good Guy doll and since we've all seen Child's Play, we all know that this does not bode well.

Mostly because mom gets cacked in the first 15 minutes, thereby causing the rest of Nica's family to show up.

Of course, the sister is all "But you can't take care of yourself!  I don't believe you're a real person since you're stuck in a wheelchair."  She wants to sell the house and put Nica in a home.

Mind you, Big Sis comes out with this BEFORE THE FUNERAL because Big Sis is a complete cunt.  She's a money-hungry bitch who resents that her husband doesn't have a publishing job anymore and, as much as the signs say other is ACTUALLY the one who's having an affair with the nanny.  We find this out later.  We ALSO find out that he put a nanny-cam in Chucky's front pocket.  This is a plot point.

So, anyway, Nica tries to diffuse the situation by giving Chucky to her niece and, to prove that she's competent enough to live by herself, Nica makes dinner.  Chucky poisons one of the dishes of chili with rat bait.  because he's an asshole who doesn't like delicious chili.  I think it's because he's jealous of people who can still eat.

No one dies at dinner but the priest that's visiting has to leave early.  He gets to die in a wreck on the way home.  Likely because he's slowly dying of arsenic poisoning.

Aaaaaaaaand, that's all you're getting.  Over the course of the night, lots of folks die.  Not necessarily in new and interesting ways but they're entertaining enough.

There are truly no words to express my disappointment with this movie.  It was certainly better than 3 but it sucked out loud compared to the rest.  The end of the movie was the best part, really.  This is NOT, by the way, the fault of any of the actors.  They did the best they could with the script they were given (except in a gawdawful flashback scene).  The special effects were decent and the updated Chucky doll, well, there's a face for ya...

On the other hand, the script was weak, they ACTUALLY HAD A ROTARY PHONE that went out in the house ALONG with the cell phone which, since she could use it in the house all along shouldn't have dropped a signal, and they didn't play out the whole "stuck in a wheelchair" drama NEARLY as much as they could have.  They also cut out a WHOLE lot of the humor of the series.  The whole thing was beige.

Watch it if you want but don't say I didn't warn you.