You guys remember how much I love British horror, right?  I think the fact that some of the best horror ever made comes from a people thought of as prissy and boring is the ultimate in irony and there's nothing I like more than irony and dead-pan humor... and cupcakes...

So, yeah.  Anyway.  My job, lately, as much as I love it, is eating my life in gory chunks and it's with THAT in mind, that I bring to you an undersung rock star of a flick, Severance. 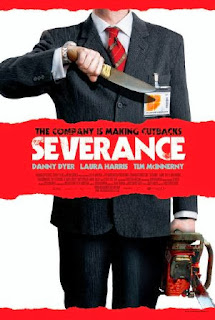 In this world of conferences and team-building exercises, it's not surprising to see horror take a bunch of over-stressed middle-management types and slap them in the middle of the woods.

We all know what the woods want, right?

Our intrepid band of... business-people... from the multi-national weapons corporation, Palisade Defense, are going to a team-building exercise in the mountains of Eastern Europe.  Seriously?  Have we learned NOTHING in horror movies?  Eastern Europe is the LAST place anybody wants to go.  But that's beside the point.  They're all "Oooooh, let's play paintball" because I guess that's what weapons people do.  Of course, we all know that it's all fun and games until someone loses an eye.  Or a leg.

Suffice it to say that this does not end well.

This is a slick one, kids.  It's got plenty of comedy, which I love, a decent amount of gore and, shock of all shocks, it doesn't leave itself open for a sequel!  FINALLY!  Someone who understands that you CAN end a story in the last reel.

I highly recommend Severance.  It flew under a lot of people's radar and sometimes, that's a great thing.  Plus, Andy Nyman needs a cuddle.

If you haven't noticed, I'm trying, lately, not to tell the entire story.  This is on purpose.  I noticed that I was giving entirely too much away.  As fun as it is, because my potty-mouth needs a workout on occasion, it wasn't fair.  So I'll just stick to vague snarkery.  I promise I'll make it worth your while.
Posted by BobSmash at 9:51 AM