The ONLY Time CGI is Acceptable.

As a gamer as well as a horror nerd, I find myself distinctly lacking in video game movie entries, here.  And there have been quite a few that bear mentioning but I'm just going to stick with one for now.  Mostly because my blog is very limited in scope and I need to leave myself material for reviews.  You don't want me to have to resort to reviewing the Monster High DVDs, do you?  I'm not sure my pancreas could take it. 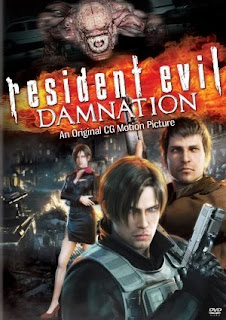 For those of you not familiar with the Resident Evil series of video games, they started as the pinnacle of Playstation zombie survival horror in 1996.  It was originally released in Japan by the name of "Biohazard" and I'm fairly certain that they didn't get to KEEP that name in the US due to trademark infringement lawsuits.  It is currently one of the most successful multi-media game franchises in the world.

And I suck at it.  Bad.  When I picked up the first one it took me three days to get past the first fucking screen because I couldn't aim the fucking gun.

ANYWAY.  After a successful series of live-action films starring Milla Jovovich (none of which actually follow any of the video game plots, each one worse than the last in that hilarious way that I adore, all of which I'll cover later, probably as part of a theme week, and Paul W. S. Anderson really needs to stop casting his wife.  Nepotism is alive and well, people.), Capcom decided to make a few of their own movies all CGI-like.  Because you can get pixels to do some awesome shit that just isn't humanly possible in the real world and now that we've gotten past the "Final Fantasy: Spirits Within" levels of Uncanny Valley creepiness in terms of creating believable human characters (that still look like they're in a cartoon) that's totally OK with me.  The Japanese, barring their strange inability to write believable English dialogue and unlike Mr. Anderson, have expanded on the game world and bring us a world-spanning epidemic that, while it's horrific, isn't as bleak as your standard zombie apocalypse.

Damnation is the second of the CGI RE films and, frankly, it's the superior of the two.  It takes place in a near-future analogue of an Eastern Slavic nation in the throes of a burgeoning revolution.  Leon, the primary hero of the franchise, no matter what Milla Jovovich would have you believe, is an American operative there to root out the revolutionaries whom he believes is using biological Bio-Organic Weapons (BOW's) in their bid for power.

Yeah, those things don't look like zombies but there's a long and colorful history to Resident Evil and the Lickers are a part of it.  Trust me when I say that zombies do play a very large part in the franchise.  The Lickers are kind of... super-zombies.

And they now have handlers. People infected with a "Plaga", which gives them control over the undead.  Oddly, no one really states who made the Plaga to begin with and no mention of the Umbrella Corporation is mentioned.  This does not deter from my enjoyment of the film, though.

Thwarting our hero are the revolutionaries, the President of the nation and Ada Wong, a super-spy who pretends to be investigating the BOWs for her own purposes.

Suffice it to say that regardless of the awesomeness of the action and the nifty creatures and the weapon-y doo-dads, ALL of these movies, CGI and live-action alike, veer directly into "action" territory and, eventually, leave the horror angle behind which makes me a little sad.  Yeah, we want to see the good guys win but did we really need a fuckin' Chun-Li battle in the Slavic equivalent of the Oval Office?

All-in-all, though, I liked the movie.  I liked ALL of the Resident Evil movies.  Just not because they're actually any good.  This one is a super action-flick and there are definitely some horrific moments worth watching but it's still brainless.  If you need a decent way to waste some time, check it out.