Oliver Reed.  Man among men.  Comfortable enough in his sexuality to wrestle naked on film with another dude (Women in Love... boring as FUCK but those ten minutes are AWESOME).  All beardy and cute with a huge personality and an even bigger dick.  The reason I like my men burly and fuzzy.  Star of the 1971 Ken Russell pseudo-historical magnum opus The Devils. 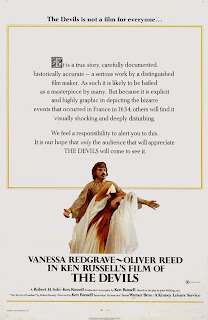 The Devils lands firmly in the "horror-adjacent" category because it's not really a horror movie.  It's based partially on the 1952 book The Devils of Loudun and the 1960 play The Devils (also based on the book), both of which were depictions of the rise and fall of Urbain Grandier, a 17th century priest executed for witchcraft following a series of "possessions" in Loudun, France.  Oliver Reed, in all his mustachioed glory, plays Grandier while his accuser, Sister Jeanne, is portrayed by Vanessa Redgrave.  And she is deliciously mad.

You know what, though?  I'm not even going to BEGIN to try and explain this one because, seriously?  It is just fucked up.  There's a lot of yelling and accents and piety and debauchery and Grandier, although he seems to be the bad guy at the beginning, is totally not.  It's UTTERLY an art film and you really need to be in a certain "I need to watch something completely fucked up" sort of mood to gain any kind of enjoyment out of it.

A lot of this footage was considered lost for good but film critic Mark Kermode started the ball rolling toward making the film whole again when he managed to find the "Rape of Christ" sequence, presumably in a box in some has-been extra's garage sale where he bought it for a nickel after haggling the price down.

So, yeah.  If you're in the mood for something dark and trippy and have a need to watch nuns get their vengeful sexual repression on, hit up The Devils.  Bring drugs.  You may need them.
Posted by BobSmash at 9:25 PM