Sex: You're Doing It Wrong.

Oh, IFC Midnight.  What have you done? 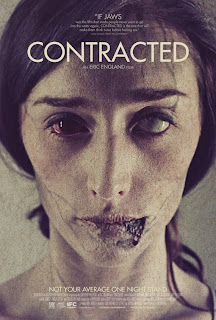 So, in the worst case of independent film slut-shaming, EVER, Contracted tells us the story of a young lesbian who grows orchids in her closet (badly) and has recently come to terms that she's a lesbian (also, badly) who is living with her mother (once again, badly) and has recently kicked a drug habit (need I repeat it?).  She manages to get her dumb ass roofied at a party by a dude who's SO fuckin' skeevy that they blur out his face.  Way to earn your SAG card.

She proceeds to both physically and mentally break down.

Like... fast.  Like the course of the movie lasts 3 days, fast.  Like she has maggots falling out of her cooch mid-hangover.  MAGGOTS from her COOCH.  You would think that the black veins and profuse bleeding from the crotch when it's not time for her period and, since she takes the time to sniff it, the horrific odor, would clue her AND HER DOCTOR (whom she goes to see TWICE) that something is monumentally fucking wrong with her vagina but since she couldn't bother to notice the MAGGOTS, I'm thinking that she is probably too stupid to own a vagina.

And the people around her are fucking morons.  Her mother?  Probably should have noticed the bloody puke and her daughter passed out by the toilet, once again, pouring blood by the pint out of her snatch.  Her punk-Barbie "girlfriend"?  Should probably ACTUALLY TELL HER SHE'S BREAKING UP WITH HER before slamming the door in her face.  Her alcohol-fueled bestie with unrequited love issues?  Maybe should have NOT IGNORED THE MASSIVE HERPETIC SORES before planting a sloppy one on her.  Her psuedo-stalker guy who's wanted to do her forever?  Also ignores the grossness when he officially and literally sticks it in the crazy.

To be honest, this is actually a relatively well-made movie with some kind of fantastic make-up effects and decent acting but I can't say I enjoyed watching it.  Aside from the stupidity, I really did feel like this film was anti-gay and anti-sex.  It was legitimately "slut-shaming" and I can't hold with that at all.  It was a slap in the face to women, to lesbians and to people with healthy sex lives.  As a film, OK.  As a social message?  Shameful.