So... horror movie fans?  Show of hands.  Who wants a vacation?

I know I do but there are places I won't go.  Australia.  Haiti.  Uganda.

When it comes to horror movies, though, it appears that anywhere near South America should be right the fuck off of anyone's list.  So what does the couple in Devil's Due do?  They take their honeymoon in the goddamn Dominican Republic. 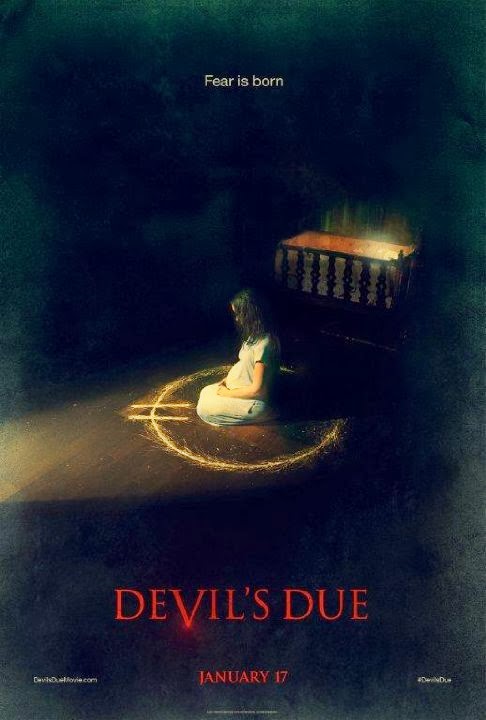 And to add to the stupid,  the newlywed wife gets her palm read which is never fucking good.  Ever.  You may believe in it and that's all well and good but if you want your skin and wallet to remain intact, it's probably best to leave that shit alone.  Like Ouija Boards.  That shit will just fuck your life up.

Next act of dumb?  Letting the cabby decide your destination, particularly when it leads to an underground club full of what happens to be newlyweds on their honeymoons.  'Cause, seriously, that's just too strange to be a coincidence.

SO, yeah.  All of this leads to OHNOES a pregnancy.  Which makes the dude very happy but, of course, screws with the young wife's plans for the future.  Dammit, she's never gonna graduate, now!  The fact that she's pregnant with a demon and being followed around by zealot Satanists is just icing on the cake.

Following an increasing weird pregnancy through the auspices of a handi-cam is not normally my idea of a fun time although I'm not gonna call this bad because it isn't.  In fact it's kind of awesome, even though it's trope-heavy as all fuck.

I mean, seriously?  Possession by baby?  Been done.  Mom eating raw meat?  Yep.  Possessee killing the local wildlife for a snack?  Checkaroonie.  This is what caused the death of Bambi's mom, kids.  Arranged pregnancy and Satan-baby?  Done and done.

All-in-all, this is pretty damn tame for a P-horror film.  Body count is low.  Gore is almost non-existent.  It's a good watch with some awesome moments and a decent amount of suspense but otherwise, meh.  I've seen it all before.  There's people in this that need eaten but, nooooo.  Most of them live.  The Hellboy horns on the kid are kinda worth it, though.
Posted by BobSmash at 9:53 PM

Email ThisBlogThis!Share to TwitterShare to FacebookShare to Pinterest
Labels: Devil's Due, horror, kind of awesome, pregnancy, snark, We're all fucked