So, in an attempt to single-handedly destroy everything I know and love about Lucky McKee's movies, Lucky McKee half-asses his way through his latest b-grade monstrosity.

And I do not use "monstrosity" in a "horror compliment" kind of way, here. 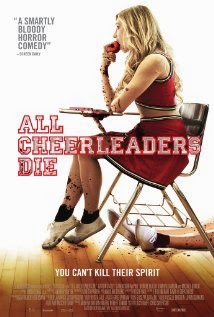 When I saw this was coming out, I thought "Hey, neat!  Mr. McKee is going to try his hand at lighter teenage fare" and then I watched it and I THOUGHT it was gonna be all about a plot to get back at a football Playa with the morals of a stoat with a glandular condition which was gonna be awesome.

Boy was I wrong.

Yeah, it STARTS that way, along with a cheerleader breaking her neck which was pretty cool because this particular cheerleader happened to be a grade-A beyotch but then the stupid started happening.

Oh, so much the stupid.  First you have the weird psuedo-wicca chick who actually hates the term Wicca because she "a real witch" with actual powers and shit who's all stalker-y with the lead girl who joined the cheerleading squad to sow discord amongst the blonde.  Then you have the cheerleaders themselves who have chosen to deliberately set the Women's Movement back about 60 years.  And then you work in some serious lesbian shit that would have made any normal, real-life, high-school lesbian hide her face.  I know cheerleaders can be out and proud and YOU know cheerleaders can be out and proud but the rest of the world?  Not so much which is why Blondie McLollipop-Shorts gets her face punched by her dickweasel ex.

And then we get into the super-strange where the guys legitimately run the girls off the road to stop them from going to the police and turning them in for assault which, granted, on the girl's part was the correct course of action but, for realsies?  Use your fucking phone.

I wanted to like this.  I really did but it was a giant ball of disjointed, unexplainable, not-very-entertaining fluff and Lucky McKee should be ashamed of himself.

Now, I'll give him props for not just making the girls zombies and promoting healthy body images but, seriously?  Magic vampires that don't need to bite you?  They can just cause your blood to leave your body and float to their waiting, open, super-collagenated pouty-lips because pretty girls are supposed to get everything handed to them?  Powered by magic crystals like some kind of Sailor Moon, anime bullshit?  And they're the GOOD GUYS?

AND!  And.  This was PART ONE!  That means McKee is making MORE of these barkers.  I feel bad for renting this shit, now, because I've AT LEAST paid for a sandwich from craft services, now.  If they mail me the sandwich, I MIGHT forgive him.

As long as it's not tuna salad.  Nobody ever lost love over that shit.