This week has been just fucked.  It's not that it's wierd or anything.  It's just one of those "I'm not accomplishing a damn thing" weeks which always suck.  So, in light of that, I'M ACCOMPLISHING SOMETHING, DAMMIT while I wait for medical records to be available for pickup.

So, anyway, I watched Oculus. 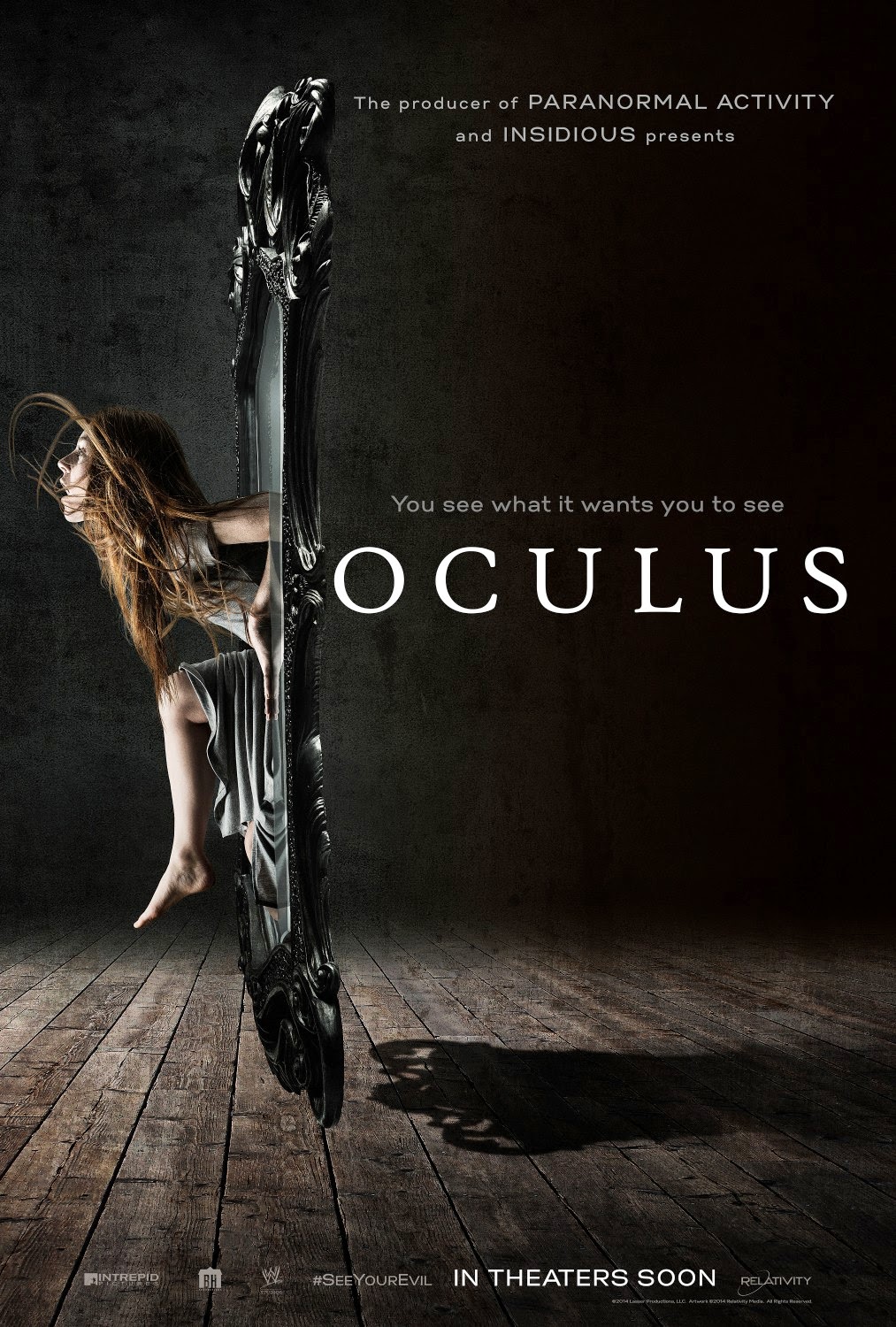 And it was disturbing...

Let's outline the plot.  Kid gets released from a mental hospital into the care of his older sister who has an obsession with an antique mirror.  Said mirror is said to be cursed and she's going all "Ghost Hunters" on it with timers and food and water and cameras and computers and redundant cameras and... plants... an... and... a dog... Wait, what?

It turns out that this mirror, which was bought for their mother, has a REALLY long history of mayhem which, when they were kids, was not known.  It's only because chicky-boo got into the antique auction business that she found the history of the damn thing which, among other things, included a nanny tucking the children into bed.  And by "bed", I mean a well.

So, in a semi-classic fashion, the story is being told via present-day activities and flashbacks to their childhood.  A childhood which included a mother who was so insecure about herself that she constantly worried about a caesarian section scar ruining her marriage (for real?) and a father who was maybe, kinda, sorta having an affair IN HIS OFFICE WHILE THE KIDS WERE HOME.  Who does that?  An idjit who wants to get caught, that's who.

Moving on... A childhood that contains a dying dog, and houseplants that Mom can't keep alive for shit and Mom going bug-fuck binkers after she snoops around Dad's office.  Like... chewing on the ceramics and chained to the wall, cray-cray.

Seriously.  You've got a cursed mirror which can not only possess you but it can bring forth all of the ghosts of the people it killed, murder house plants and innocent doggies and make you think you're eating glass and this is what I get?  Two-dimensional characters plotting against a vanity?

I mean, it's not bad and it's an OK way to turn your brain off for a few hours because there is a serious lack of thinking ability required here but fuck, this could have been so much better.  So much more intense.  As it stands, I felt like I was watching an uppity version of Goosebumps.

UPPITY, I tell you.

I did like how they tried to build in the "unreliable narrator" trope and make the kid that just got released into the wild the "sane" one but it felt a little tacked on.  The acting itself wasn't bad, either, considering what they had to work with but the story probably looked good on paper.  I should know, by now, not to trust a horror film that says "From the makers of Paranormal Activity and Insidious" on the poster but I do this for YOU.

Now, if you'll excuse me, I have a director I need to slap.