Jack Chick Can Kiss My Ass.

So... when you hear the word "horror", what comes to mind?

Blood and bone and sticky things?  Skitterings just outside your field of vision?  Great beasts capable of tearing a man in two? Hauntings of a paranormal sort?

How about nerds.  Do you think about nerds?  Ever?  Are they BENEATH YOU or something?  Why doesn't anybody ever think of the nerds.

Joe Lynch did and it was GLORIOUS! 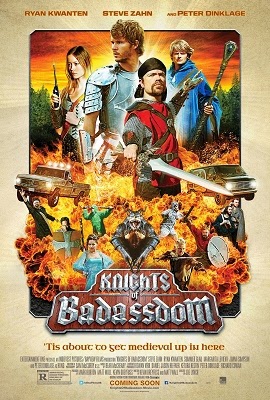 Nerds do not get nearly enough screen time.  Or... they didn't until The Big Bang Theory came along.  Then, suddenly, they're all over the place.  I kind of don't count Revenge of the Nerds because, seriously?  Vader-Rape?  Not cool.

So, this Joe Lynch guy comes along and says "Hey!  Let's make a movie about LARPing gone incredibly wrong when some asshole buys a book off of EBay and treats it like a wizard's spellbook when, in fact, it actually is one.  WOOHOO!"


So... that's the movie.  Really.  Yeah, there's some cheesy romance and the getting over of exes, imagining your ex as an evil she-beast who is more than willing to tear the heart out of her victims and nosh on it in the middle of the woods, the temporary resurrection of fallen friends to assist in the defeat of your foes, new romance with Summer Glau (who is ADORABLE), Peter Dinklage on a WHOLE LOT OF DRUGS and prissy DMs who delight in making the game uncomfortable for everybody.

This movie isn't going to make sense to anyone who hasn't LARPed or doesn't know someone who has.  This is an entirely geek-centric flick and I, for one, am down with that.  I mean, barring the fact that the "hero" is the "cool guy" who gave up Dungeons and Dragons years ago and was literally shanghaied into the whole thing with the help of a shitload of alcohol and enough pot to stone your average brontosaurus.  Why it gotta be the cool guy, huh?  Why couldn't it have been the squeaky nerd with glasses, huh?  Oh, wait.  That's played out, too.  Well, fuck.  I guess I'll just have to live with it.

On the plus side, if, like me, you hold just a tiny touch of disdain for LARPers who take what they do entirely too seriously (Fucking Vampire: The Masquerade created some heinous geekery, man...), then you'll also get a kick out of Knights of Badassdom.  Because there's this:

And for you Game of Thrones fans?  There's this:

Pay no attention to the idiots on IMDB because, as I said, they're idiots.  YES, the characters are two-dimensional.  YES, this is totally B-Grade comedy-horror schlock.  YES, this was written to pander to LARPers.  You know what?  I DON"T CARE!  This is a horror movie whose cheeks you wanna pinch and say "Oo's a widdle horror movie, den?  Oo's all adorable and I just wanna eat you up, yes, I do and when you grow up you'll scare EVERYBODY and mommy will be so proud of you, yes, she will."

Just fucking watch it.  You'll be glad you did.

And, on a final note:  I leave you with this to brighten your day: