I am so incredibly gullible.  Because I picked up Sx Tape thinking that it might give me something I've never seen before.  Because I am, according to the commonly held definition of the word, insane. 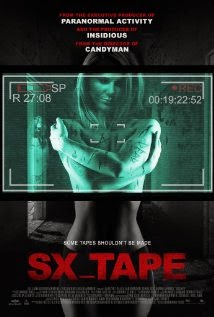 Maybe it was the "Director of Candyman" thing that threw me off.  Maybe I thought Oren Peli might have wised the fuck up when he realized that Wer was actually a good movie.  Maybe I thought I'd get some illicit peen out of the deal.  I don't know, but SOMETHING possessed me to watch this movie and when I find out what it is, I'm gonna slap it in the dick.

The story.  You wanna know what the fuckin' story is?  Two young adults (and their idiotic friends) get all fuckin' artsy and decide to do their fuckin' in a fuckin' abandoned fuckin' mental hospital with a fuckin' camera and get fucked by the fuckin' ghost of a sexually abused fuckin' inmate.  And also, fuck.


Don't get me wrong.  It's not the fuckin' I have a problem with (although that trope fits in pretty damn heavily since it's IN THE FUCKING TITLE).

It's like they're not even trying anymore.  Yay, pretty blonde girl that's willing to show off her (pre-boob job, assuming she wishes to REMAIN in Hollywood and have a career unless she goes all Anna Paquin and gains some actual acting chops which I do not see happening) tater tots and simulate sloppy BJs on camera gets to pretend she's all possessed and crazy (badly).

Yay boyfriend with a Handi-Cam gets to chase his crazy girlfriend around the aforementioned abandoned mental hospital because "crazy shit" is happening and she gets massive nosebleeds.


And they don't even get to the creepy stuff until HALFWAY through the damn movie!  I know that there's only so far you can take this but, fuck, for real? I have to put up with 45 minutes of "quirky, artist girl and her tiny tits being all arty and cute and Zoe Deschanel-y what with trying to be all sex kitten and all" before you get with the ghostly?  FUCK.  YOU.

No, seriously.  That's it.  It's Blair Witch done horribly wrong.  It's stunningly awful.  Can we PLEASE stop giving Oren Peli money, now?  Please?  Pretty please?  With a cherry on top?  I swear, I will blow the dude that punches him right in the sack because sexual favors are how I get shit DONE, yo.

Run screaming from the horribleness of this film.  Fucking Grave Encounters was better than this and it didn't even have the lure of sex.

This isn't even worth a popcorn bucket handy in the back row.
Posted by BobSmash at 7:28 PM