It has come to a pretty sad state when big budget horror fails to fascinate me and I return to low-budget.

And I'm talking "Let's bust out the Handi-Cam and make a real movie instead of all of that "found footage" bullshit except we have no money so let's raid each other's attics for cheap Halloween crap and use that instead of making molds and shit 'cause that costs money."

And that is what I got when I got a hold of Demon Ressurection. 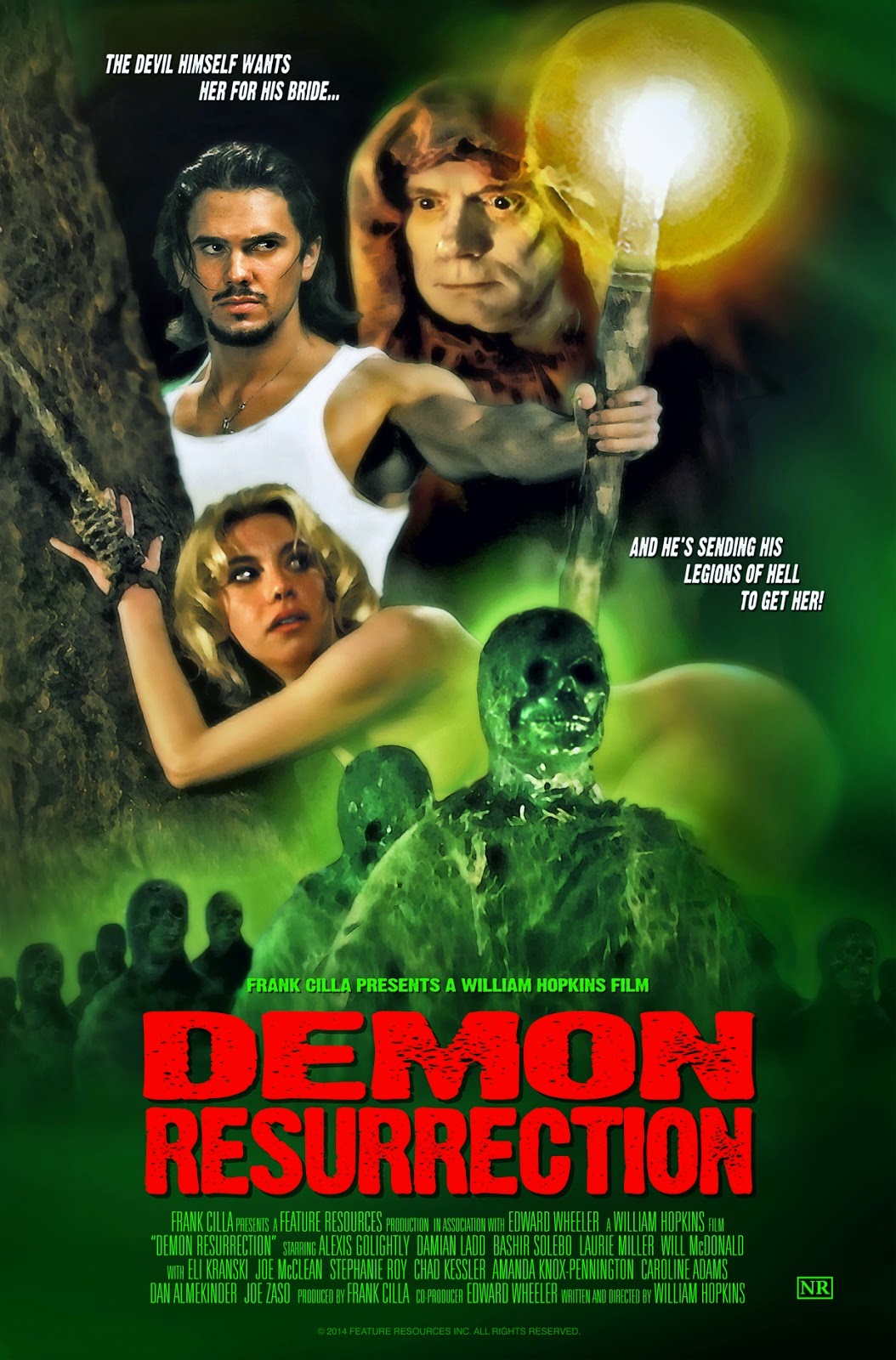 So, this doctor lady and her friends (you know them:  Asshole, sexually generous girl who's worried about her weight but chugs a bottle of Pepsi in about a minute, gay guy, black guy, asshole's "battered wife syndrome" girlfriend, other gay guy) all meet up for an intervention because she's afraid that her bestest friend in the world is getting all distant because of meth and Drano™.  They head up to this actually rather tasteful little cottage in the forest(?) of Long Island (next to an archeological dig site) and get with the intervening.  Turns out, bestest friend isn't on the drugs and boyfriend is actually a nice guy that just happens to be Harry Potter.  Bestest friend is running away from a cult.

Old, weird guy is all "you must let her come back to me because she's my fiancée and I totally don't run the cult that got her all pregnant and shit, oh and get out of the house before dark or creepy shit will happen and in the meantime I'm gonna kill Harry Potter for realsies because I'm not Voldemort."  They don't listen, creepy shit happens with the corpses from next door.  Pregnant lady pushes out a baby Xenomorph.

This, kids, is guerilla film-making.  This is grindhouse goodness.  YES, it's got awful acting.  YES, it's got mushmouthed cult babe with tiny 70's boobs.  YES, it's got a set the size of a postage stamp.  But you know what?  I don't give a shit.  This was kind of amazingness on the spectrum of low-budget horror movies.  It kept me engaged and entertained and it was greater than the sum of it's laughable parts.  I APPLAUD the film makers for taking risks and putting together a movie that, on the surface, is just terrible but at its core is just begging for more money and maybe a little editing down of some of the longer scenes.

In fact, I'd say that the only truly bad part about this is the editing but we expect that from rogue cinema.  This is how movie makers earn their chops and grow and I, for one support that whole-heartedly.  And, really, this is actually BETTER than, say, Jack Frost or Thankskilling.  At least in this one we don't have to listen to the same joke 50 times and hear horrific one-liners from a bird puppet.

I also appreciate that the black guy and the two gay dudes don't die first and they're actually fleshed out as characters.  Not WELL, mind you, because none of the characters are all that well-defined but you can at least see the attempt.

If you like 'em down and dirty, I say give this one a peep  It's refreshingly unassuming.