Are You Feeling Randy, Baby?

It is a good day because Horns is available on-demand! 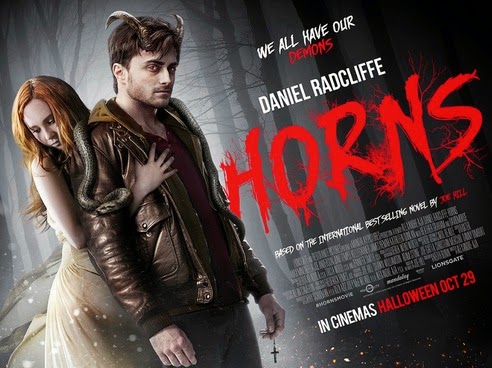 Considering that this is from Joe Hill, son of Stephen King, author of Heart-Shaped Box and writer for the AMAZING comic series Locke and Key (which should have been fucking green-lit for TV because that would have been some amazing shit, yo), you should expect quality and you get it.  In spades.  Pitchforkfuls, really.

So, here's the story.  A grief-stricken young man (Daniel Radcliffe and OH how Harry Potter has grown... I don't normally like 'em thin but I'll make an exception 'cause I'm bi-size-ual) who has been accused of the murder of the love of his life is just trying to get through the trial.  He's being hounded by the press, misunderstood by his friends and family and drowning himself in drink.  Only his lawyer seems to have any faith in him.

And then this happens:

Yep.  Horns.  And the prosthetics are WONDERFUL.  They give him the power to hear everyone's sins.  Not in a psychic kind of way.  People just tell him.  Like ultimate TM-Fucking-I kind of stuff.  The girl who he just slept with (after a night of drunken broken-heartedness) REALLY wants to eat a box of donuts.  NOW.  A little girl wishes to burn her mommy.  Mommy wishes to drive off and desert the spoiled brat and hook up with her golf instructor.  The reception at the nurses's office REALLY wants to yell at the lady to her her screechy brat to shut the fuck up.  There's this fantastic scene with the doctor after he tries to get them removed that you HAVE to see.

And when he touches them, he can SEE their sins.

He decides, like any sane person would, to use his new powers for good and find his girl's killer.

Now, I haven't read the book in a while so I can't compare it to the film but I REALLY enjoyed this one.  Even the minor characters and walk-ons were fleshed out in some way.  You knew secrets and lies about EVERYONE.  It was small-town gossip writ large.  It was a little bit like Joe Hill expanded on the idea of his dad's book/movie Needful Things only without the crass commercialism and the "devil" in this was a force for good.and it was delicious.

About the only thing that I can really dig on with this is that the visual metaphors were kind of over the top but, damn, if you're gonna give the main character literal horns you may as well go big or go home, right?  Besides it all blended nicely with the whole idea that even Satan was once an angel.

I'm not big on religious stuff as a rule but Horns, even with the blatant imagery (Really?  Eve's Diner?  The logo being an apple?), it wasn't ham-handed with it.  None of the characters, barring the priest, were overtly religious and even the scenes in the church were light and poignant to the story of the budding relationship rather than being religious in and of themselves.

And there's really this perfect blend of pathos and humor that makes it a joy to watch.  It feels... real.  It's not a roller coaster of emotions, it's just... life.  Bad things happen to good people.  Bad people get what's coming to them and sometimes karma is a hilarious bitch.  Alexandre Aja knocked this one out of the park.

Truly, if I get the chance to see this in theaters when it comes out on the 29th, I will GLADLY do so but having it come out on-demand first was a glorious treat.  A treat that I can freely engage in without aggravating my pancreas.  I love treats.

HIGHLY fucking recommended.  This is a work of art.
Posted by BobSmash at 10:03 PM