OK, so, I'm going to admit something I've never told anyone before.

His books are OK and I kinda liked some of them but I prefer Stephen King, Mira Grant/Seanan McGuire or Robert McCammon for my horror reading pleasure. 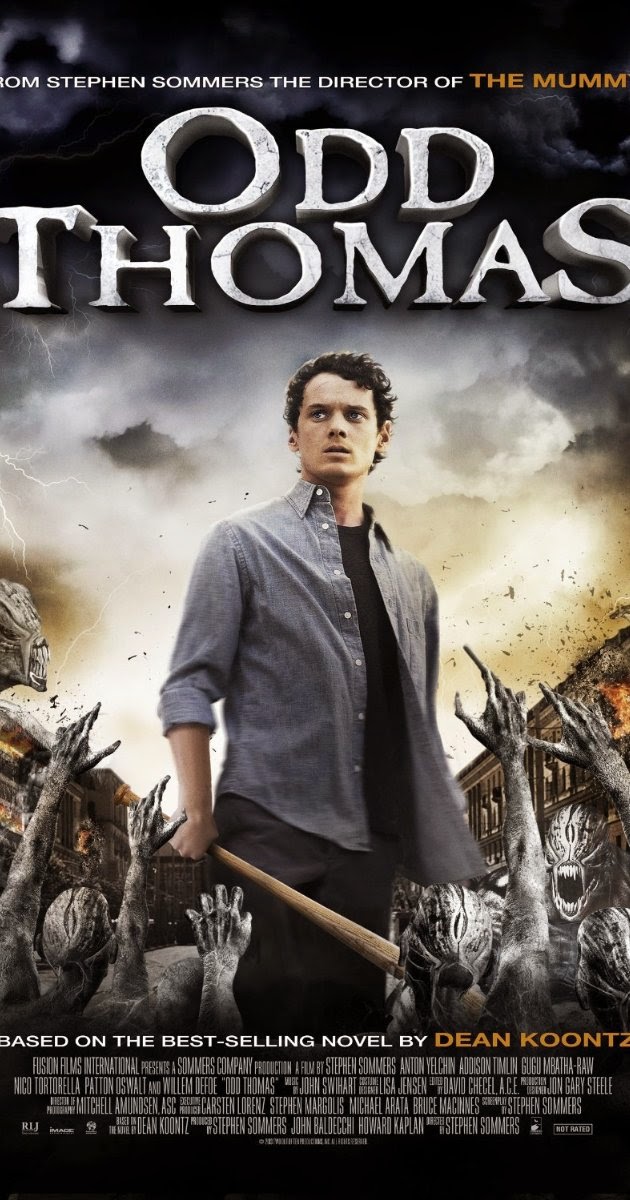 Odd Thomas is an absolute delight.

Our main character, Odd Thomas (yes, that is really his name, played by Anton Yelchin), has the ability to see spirits.  He can't talk to them because the dead don't speak, but he can see them and help them let go of whatever fetters they have to this world, whether it's a murder or a lost puppy or what have you.  The movie only shows us the murder bits but I'm assuming that getting them to be able to let go is the majority of his job description.

His girlfriend, Stormy (Addison Timlin), is the yin to his yang.  The cobbler to his peach.  The daily dose of what were you thinking to his hairbrained-ness.  (No, really.  Hairbrained-ness.  She calls him Pooh Bear because his head's full of stuffin'.  Not literally but you know what I mean.)  It's all very adorable in that whole "eventually they end up in danger" kind of way.

Odd doesn't make his abilities known to everyone but the police chief (Willem Dafoe) knows about it and helps him create more believable tales when he gets involved in the weird in a more physical fashion so he doesn't end up incarcerated.  It's a good arrangement.  They're like family  Again with the "awwwwww."

But then trouble comes in.  BIG trouble in the form of bodachs, evil beings who are drawn to carnage and mayhem (aren't we all)?  The more of them there are, the more carnage there'll be and this one guy in the diner has them dripping off of them like butter at a fuckin' lobster festival.  Odd can't let this one go.  He has to go save the day.

So, before I give the story away completely, I have to say that this is fun supernatural horror.  It's not dark and it doesn't have to be.  It's a breeze to watch, it's not overly complicated, the dialogue is fun and it's got that right mix of up and down that I like.  It's like a mouse coaster.  Hills and bumps enough to be fun but none of the loops (which are also fun but in a different way).

No, seriously. This is quick-witted and almost perky.  Well, as perky as Anton Yelchin gets.  He's got some comedy chops, though, and he's not your average "Adventureland/Superbad" kind of Judd Apatow nerd in this one like he was in the Fright Night remake.  He's grown and it shows.  There's a maturity to his snarkiness in this one that I really liked.  The interaction between Odd and Stormy is just shy of perfection and, because I'm a weepy nerd, I watered up a little at the end.  It's a bittersweet one, kids.

This is not a gore-fest.  This is not full of jump-scares.  This is about a Ghostbusters level of creepy which makes for an excellent kids-introduction-to-horror movie.  Yeah, there's some violence but it's no worse than your average police procedure drama.  The more gruesome stuff is implied and not seen.