See No Evil, Have No Fun.

Jen and Sylvia Soska WHAT HAVE YOU DONE!?!

I say all halfheartedly because, believe it or not, I liked their latest piece of horror fluff, See No Evil 2. 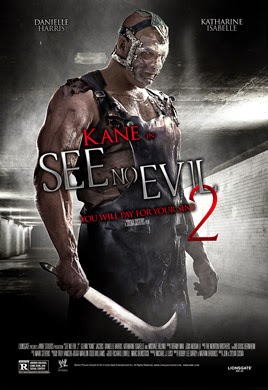 Not to tell you too much about the movie, 'cause it's all new and shit, picture it.  A birthday party in a morgue with a recently "deceased" serial killer with religious mommy issues.

And that's all you need to know for now.

Now, first let me start by saying that this movie is NOT perfect at all.  We've got some serious Scooby-Doo bullshit going on but that's kind of OK.  All peeking around corners and "Hey, gang!  Let's split up!" like that's going to really help anybody because everybody knows that those slasher fuckers can teleport.  Plus, how fucking big is this morgue, anyway?  How many morgues do we know that are made up of miles and miles of fucking corridors and still only have 3 people working in them, let alone not let all of the morticians have access to all of the doors?

Also, if someone can tell me exactly what the giant serrated machete Mr. Goodnight finds when he opens the goddamn Batcave weapons stash, that would be appreciated because I really don't see any reason for a morgue to have that sort of thing lying around.

On the other hand, pretty drunk people get slashed in a goddamn morgue!  Am I right?  That's awesome, yes?  Oh, look.  Death and dismemberment where death gets brought to finish up the paperwork.  Look at all the nifty surgical implements.  Preeeeeeetty.  Too bad none of them get used in favor of the giant serrated machete thingy.

But then there's all of the trope-heavy bullshit that, seriously, Soska sisters?  You need to get over.  You're better than this.

BUT!  We also have the lovely and talented Katherine Isabelle who brings some much needed humor and lightness to the movie and she's kind of hilarious.  She reminds us that we shouldn't be taking this 90 minute slab of eye-candy too seriously.

I'm not going to say that this is a masterpiece of horror because it's really not.  The Soska twins know what they're doing and this is an enjoyable watch (but, seriously, don't make a drinking game out of it, you'd be dead in the first half-hour from the stupid) and, thankfully, they don't rely on the religious aspects of the first film too much but it's a little blasé about the whole "Hey, we're stuck in a morgue with quite a few exits but our phones are locked in a safe so we can't go for fucking help 'cause he's EVERYWHERE, man!  EVERY-FUCKING-WHERE!"

It's brain-candy and I appreciate that.  Just don't expect award-winning caliber.

Speaking of Brain Candy!  Y'all should check out Carl Bachmann's Kickstarter for his new project Party Slashers.