Chuck E. Cheese's, Where a Kid Can Be a Snack.

You might want to sit down for this because I'm going to say something that I don't believe I've ever said before on the pages of this blog.

You really want to stand?

OK, it's your funeral.

I found a movie since Hostel that I did not hate with Eli Roth's name attached to it and it's about a killer clown. 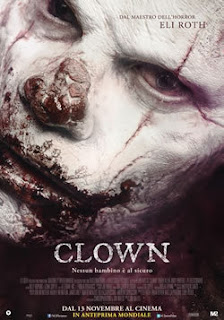 Well, I told you you should be sitting down.

Seriously, folks, BIG trigger warning, here, if you're coulrophobic, you should skip right on by this review.  (But, please, seriously, don't... I need the site traffic.)

ANYway.  So, the deal here is that this guy has the clown for his kid's birthday party cancel on him so he's all "well, crap" but as he's rummaging through a house he's remodeling, he comes across, wouldn't you know it, a fucking clown suit and he's all "Everything will be fine, honey, *click*"  SO he shows up to the party all clowned up and saves the day and all of the kids are too hopped up on cake and balloon animals to recognize that clowns are fucking creepy as balls.

It continues that he can't get the damn thing off.

Like, REALLY can't get the suit off.  It's like someone superglued it on him in his sleep.  But, they didn't.

With all of the "blahs" up there, you'd think that I hated this but, to be completely honest, I didn't.  It was not genre-changing in the least, and it could use a little pick-me-up in the way of body count and gore but this is a solid story.  On the surface, it's your standard monster movie.  A heaping helping of "That's not your Daddy, anymore" with a decent sized portion of demonic possession (complete with utterly fictional Scandinavian Demon backstory), and a side order of childhood phobia.

Underneath, though, you can catch little hints of "what happens if my husband dies" and "how do we deal with the very real possibility of mental illness".  How do I know if I can make the hard choices, here?  Because these are real grown-up fears and it's nice to see some attention being paid to them.  Because adulting is hard and the world needs to be reminded of that by way of horror movies about clowns.


Now, this movie isn't going to be winning any major awards any time soon but I won't say it's a bad way to spend a few hours, either.  New director Jon Watts (whose breath still probably smells like Roth's nutsack but we all have to start somewhere, I guess) didn't hit it out of the park but he did snag a couple of bases.

I caught it on YouTube of all places but I wouldn't expect it to be there for long because copyright and stuff.

May I suggest a cotton candy and peanut snack tray?
Posted by BobSmash at 9:24 PM