No, I'm a Frayed Knot

So, yesterday was a bit of a treat for me as I got some downtime in wedding planning (Yes, I'm getting married!  If you would like to help out with that for whatever reason, click here and thank you in advance!) so I got to watch a couple of new movies rather than half-assing my way through flicks I'd already seen.

Unfortunately, the other new movie I got to force into my eye sockets was The Gallows. 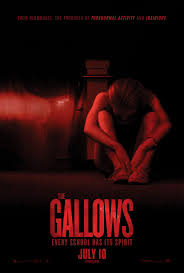 WHAT IDIOT MOTHERFUCKER GOT THIS GREENLIT?!?

I mean, yeah, "school haunting by the kid who got accidentally hung in a school play because the people building the sets didn't know how to rig it so he didn't actually die" is a seemingly solid premise, right?  Could be spooky.  Lots of chances for theater shenanigans, do you think?

Yeah, no.  Ish.  I mean, there are plenty of shenanigan-like opportunities but none that are actually taken.

For starters, the plot, here, isn't "the production of the play is haunted".  The plot is "Asshole teenager that isn't content with just sitting at home, faux sexting, skyping with friends after bedtime and being young and pretty decides that in order for his buddy to win the heart of the lead actress in the school play, he has to first tell said lead actress that his buddy has a crush and then convince said buddy, who is the lead actor only he's not good at all which speaks volumes for the dork they cast for this movie, that the play will tank if he tries to deliver a single line so they have to break into the school at night through this door that is never locked (which sets off a whole lot of "look at me, I'm the school maintenance guy and I should be fired on the goddamn spot" whistles) and break the set."

You're gonna look me in the eye and tell me that someone actually put this in writing?  Someone got paid thousands of dollars for this?  How do I get in on that because I'm relatively certain that I could fall asleep on my fucking keyboard and come up with a better story than this.

So, they get into the school as planned and then get locked in, natch, and are found only by the aforementioned lead actress which is... weird.  Because there are no security cameras in this school?  No security personnel patrolling the grounds?  No janitor?  C'mon, man, Old Mr. Wilkins should have shown up at least ONCE in this Scooby Doo shitshow!  Have you no respect for the standard tropes of teenage horror films?

Yeah, even for found-footage, this is a dumpster fire.  It's about as Dramamine-worthy as Blair Witch with the screaming found in Unfriended and, shockingly, none of the actual spookiness of Paranormal Activity.

Yes, there are examples of well-made found-footage films.  This is not, by any stretch of the fucking imagination, one of them.

If it hadn't been for the fact that I enjoy writing these articles, I wouldn't have touched this with your father's dick.