That Which Man Was Not Meant To Know

I'm about to be a little bit of a hypocrite only not really because The Atticus Institute is a mockumentary. 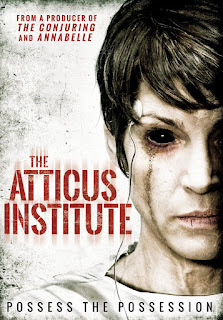 The premise behind this movie is a parapsychological testing lab created in the 60s.  Like most of these institutions, they had they battery of tests.  The cards, the dice, the coins, the electric football tables... wait, seriously?  Electric football tables?  I know they were a thing but, for fuck's sake, there has to be a better way to test telekinesis.

Everything is going all "Ho-hum, I'm so bored with trying to find people that actually have magical powers.  When will someone with real power come and make ten years of this bullshit worth it?"  And along comes Judith Winstead.

Now, we can tell right away that good ole Judy has some... issues.  Frankly, the folks at the institute had to be blind and deaf to not know this.  They kept going, though, because she was blowing the other psychics away with her utter mastery of "mind over body".

This doesn't end well for a damn one of them.

And WHY, do you ask, does it not end well?  Because Judith is fucking possessed.  She's not just crazy, we're talking inches away from crab-walking down stairs and a full-on Exorcist twist.  (And there's your Buffy reference for the day.)

Now, I don't normally go in for possession movies but I have to say that this one was a pleasant surprise.  It wasn't preachy, it was just people in an extreme circumstance.  There was almost no reference to religion until the end when they had to bring in a priest.  (Mind you, not an old priest and a young priest.  Just one priest.  He does not do his job right.)  It was... refreshing, if not original.  There have been plenty of films that reference studying psychic phenomena as a focal point for evil.  This one just used the old tropes extremely well.

The effects?  Old hat, unfortunately.  Yeah, there was some CGI splatter.  That didn't make me happy.  What, did you blow your budget on 70s pimp-wear and couldn't afford some fucking Karo syrup and food coloring?  Seriously?  What the fuck?

Overall, I really did like this one.  maybe not enough to watch it again, but it was certainly a couple of hours well-spent.  If you don't mind a slow-burn, check it out, kids.
Posted by BobSmash at 9:55 PM