I made myself watch Annabelle.  I didn't wanna do it, I had to.  Like it was some kind of sick obsession.  I didn't even LIKE The Conjuring!  But, no, I had to see the horrible for myself because I am what?

A glutton for punishment. 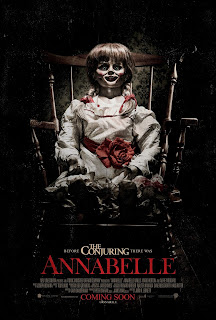 DAMMIT, I hated this movie.

So, we all know ABOUT the doll, Annabelle, from The Conjuring but this movie is about the doll itself and the havoc it wreaks on a poor pregnant woman's body and sanity.  Because dolls are creepy.  We know and understand this.  We also know that creepy dolls, such as Chucky and Tiffany, are, 9 times out of 10, going to try and kill you.

Well, in this flick, we find out how Annabelle got to be the soul-sucking plastic homunculi she is today.  Or at least she was in the 70s.

Bearing in mind that this movie was "based on a true story", the doll was involved in some fuckin' occult murder or some shit and soaked up the blood of one of the stabbers.  Because this was all planned through the auspices of patchouli and weed.  To bring a demon to Earth.  Because they thought they had a chance to gain power from it.  Because cultists are fucking idiots.

Seriously.  A damn DOLL?  They couldn't just kidnap a baby like normal people?  They had to link this demon to a doll?  Demons don't particularly care for dress up and tea time, do they?  Who fucking knew?


Anyway, the movie is all about dealing with the potential loss of a child and a cursed doll.  That's really it.  Nothing groundbreaking.  Nothing even interesting.  I pity Alfre Woodard who has been relegated to being the magical fucking negro.  Yes, that's a trope.  Yes, it's racist.  Yes, Alfre should be slapping the bejeezus out of her agent right about now.

Why did we let this movie get made?  Who let the editor put in all of the boring.  ALL OF THE BORING!  There are a few people I need to punch in the dick right about now and hopefully that bit of exercise will allow me to get the hour and a half I wasted on this shit back into my life.

This whole movie was Snoozeville.   Not only was it nap-worthy but it was disjointed, badly acted (sorry, Alfre), horrifically costumed and OMFGPONIESONTHEBBQ, that fucking doll is entirely too butt-ugly to be anything but recyclables.  Not scary, people.  Just incredibly fucking ugly.  If it was an actual PRETTY doll and went through some kind of metamorphosis to represent it's possession, I may not have had such a problem but even before the film started it looked like it fell out of an ugly tree and hit every goddamn branch on the way down.


I'm going to need to start reading some calculus textbooks to get some of the IQ points I lost back, here.  I hate math.  See that, filmmakers?  You made me math.

I hate you so fucking hard, right now.

I'm just glad it's over.  Now I can pray for the sweet release of a violent death so that I can forget this movie ever existed.

Email ThisBlogThis!Share to TwitterShare to FacebookShare to Pinterest
Labels: Annabelle, horror, kill it with fire, review, snark, so bad it hurts