Now that I have your attention, let's aim our peepers at today's assignment: 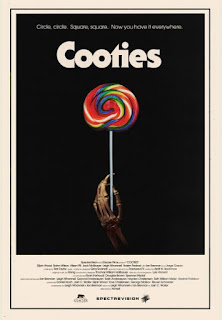 Ah, Cooties.  How have we survived so long without you?  A zombie movie where the only zombies are kids?  Surely you jest!  You don't jest?  This is fo' real-real, not fo' play-play?

Only just a little squee, though, because this movie?

So, our story goes a little like this.  Tainted chicken nuggets infect school kids with a zombie virus.  Because they're school kids, they're complete asses about it.  Enter the new summer school substitute teacher, Elijah Wood, an"author" who's never actually been published and who has decided to use his classroom like a set of pint-sized editors.  For a horror novel.  And wonders why he hasn't been published, yet.

Of course we then meet the rest of the staff.  Former high-school jock turned gym teacher aching for the glory days, hyper-vigilant Tea-Party enthusiast, sweet and lovable old flame, kooky science teacher with "previous brain injury" realness, and obviously gay .  Basically a group of unlikable jerks (barring sweet and lovable, up there and kooky kind of grows on you but never quite gets there).

So, one of the cool things about this flick is that we're watching the outbreak from step one which, unlike ANY of the Cabin Fever films, is actually well done and makes some fucking sense.  You know... barring a disease that takes a few hours to hit the first girl who bites into that nasty chicken nugget and doesn't even bother to notice that it's fucking black and oozing green stuff but then hits both of her first victims within minutes which should be patently impossible but we pay movies to make the impossible possible so why am I even questioning this?

ANYWAY!  Yes, kids, there are a lot of parental fears wrapped up in this one and they aren't being analyzed, really.  They're being lampooned.  Which I love.  Because fuck parental paranoia.

"Pink slime"?  We, as Americans, didn't LIKE the shape of actual chicken so we made nuggets.  How else do you think those little nuggets of chicken meat get shaped to look like a fat California?  It's still meat, it's just ground like hamburger.  Cows don't come in a patty shape either.

"Anti-vaccination"?  Yep.  If you don't get your kids vaccinated, they will turn into snarling Hell-beasts and eat you.  Or, y'know, just die from a completely preventable disease before passing that shit on to people who either can't get immunizations for one reason or another or people with auto-immune disorders and FUCK YOU if you think that vaccinations cause autism because, seriously, if it really comes down to it would you rather have a live kid with Asperger's or a dead one.  For real, fuckwads.  You choose.

"The horrors of puberty"?  Yeah, not so much.  That's the kicker, here.

So, what do I think of Cooties?  I think it's a decent way to spend a couple of hours and that the producers spent a little too much on star power and a little too little on script writing and special effects.  There was just a hair too much CGI blood (and, seriously, Hollywood, fucking quit it) for me to lose myself in it and while it was funny, it wasn't the side-splitter I thought it was going to be.  If you're going to produce a movie that features ONLY zombie children as your unstoppable monster force, you'd better make my stomach feel as if I'd done a million fucking sit-ups.

I mean, it's enjoyable but it needed work.  My husband hated it but he's generally bored by horror movies anyway so he doesn't count.

OK!  Now that that's out of the way, who wants nuggets?