And then I was ever so cruelly reminded that I'm not allowed to have them. 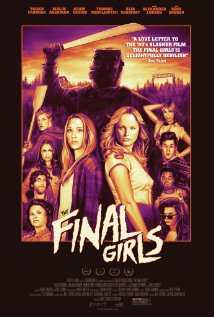 Now, let me preface this by saying that I did not hate this movie.  It's a good movie, for what it is, but, like Cooties, I found it somewhat lacking.  Not overly so, but there are some pain points.

ANYwhosawhatsit, The Final Girls is a story of loss, hurt, wish fulfillment and the understanding that we can't always have what we want.  I want good horror cinema but can I have it?  NooooooOOOOOOOOoooooo.

Max, played by the ever-close-to-tears Taissa Farmiga, loses her actress mother Amanda (Malin Akerman) in a car accident and just can't fucking let go.  I mean, yes, the death of a loved one is difficult to bear and it's very painful but after a while it's time to move on.  Swanning about the moors hoping that everybody forgets the one thing that made your mom famous isn't healthy.

Fortunately for us, director Todd Strauss-Schulson is well aware of this and every other character in this movie makes painful, direct points to Max about how spending all of her damn time in mourning is keeping her from actually having a fucking life and, frankly, it's affecting their's, too.

In the midst of all this "woe is me", a dear friend... well... a friend... well... an acquaintance who happens to be related to a friend convinces Max to go to a screening of Camp Bloodbath, the film-within-a-film we will be forced to endure for the next 90 minutes and the movie that her mother is best known for.  Suffice it to say that Max hates this idea.  She hates it a lot.  She goes, anyway.

Aaaaaaaaand, they get sucked into the movie.

No explanation.  Not a dream.  Just a random set of circumstances that, normally, would have just fried everyone in the theater until their heads popped like... dammit, you're gonna make me do this, huh?  Fine.  Corn.

AND CORN IS WHAT WE SHALL HAVE!  By way of a director whose only idea of a horror movie trope is "If you have sex, you die".  Yeah, there's a touch of "Dumb Blondes Die First", "Brunette Badass" and "Drugs and Alcohol are Gateway Deaths" and, of course, "The Final Girl" (which is a trope that's starting to wear thin since it's seriously limiting to diversity and creativity) but the big no-no is don't flash your sweater puppies.  Don't show 'em, don't touch 'em, don't let anyone else touch 'em.  Todd's message is "sex, eeeeeew" and for that I need to slap him with a confused lobster.  No, I don't know why the lobster needs to be confused.  It just sounded good.

I mean, they literally taped a girl's hands into oven mitts and slap a quilted vest on her to stop her from performing her scripted strip-tease until they'd laid out a trap.

Unlike The Cabin in the Woods, Tucker and Dale or Scream this is meta, knows it's meta and thrives on being meta but the problem here is that it's not meta enough to be truly effective or even truly funny.  Sure it's got in-jokes and shout-outs and an "I'M OK!" chuckle or two and who doesn't love those but there's a MILE of space between this movie and the Scary Movie franchise and this could have done with a hell of a lot more in the way of winking splat-stick and without even coming near "parody".  It needed to have more "I know why you think this is funny" and less fucking "tee-hee".

Like I said above, though, it's not a bad way to spend a couple of hours and for being Todd's second feature film, I'm willing to give him a little leeway.  Not a lot, because those who are not punished don't learn, but some.  More like a healthy slap followed by a cookie.